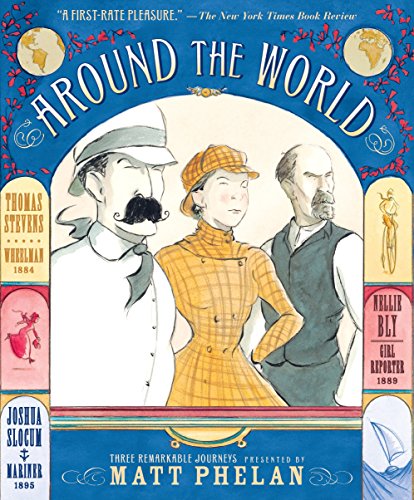 Around the World
Matt Phelan
A Scott O'Dell Award-winning graphic novelist follows three dauntless adventurers on a Jules Verne-inspired challenge: circling the world, solo!As the nineteenth century wound down, a public inspired by the novel Around the World in Eighty Days clamored for intrepid adventure. The challenge of circumnavigating the globe as no one ever had before—a feat assuring fame if not fortune—attracted the fearless in droves. Three hardy spirits stayed the course: In 1884, former miner Thomas Stevens made the journey on a bicycle, the kind with a big front wheel. In 1889, pioneer reporter Nellie Bly embarked on a global race against time that assumed the heights of spectacle, ushering in the age of the American celebrity. And in 1895, retired sea captain Joshua Slocum quietly set sail on a thirty-six-foot sloop, braving pirates and treacherous seas to become the first person to sail around the world alone. With cinematic pacing and deft, expressive art, acclaimed graphic novelist Matt Phelan weaves a trio of epic journeys into a single bold tale of three visionaries who set their sights on nothing short of the world.
1 Vote

In the year 1884, ex-miner and newly aspiring cyclist Thomas Stevens set out to bicycle around the world, being the first person to do so.