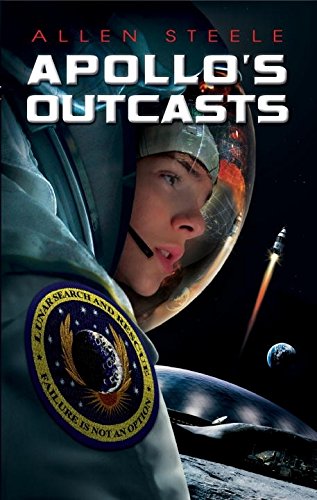 Apollo's Outcasts
Allen Steele
Jamey Barlowe has been crippled since childhood, the result of being born on the Moon. He lives his life in a wheelchair, only truly free when he is in the water. But then Jamey's father sends him, along with five other kids, back to the Moon to escape a political coup d'etat that has occurred overnight in the United States. Moreover, one of the other five refugees is more than she appears.Their destination is the mining colony, Apollo. Jamey will have to learn a whole new way to live, one that entails walking for the first time in his life. It won't be easy and it won't be safe. But Jamey is determined to make it as a member of Lunar Search and Rescue, also known as the Rangers. This job is always risky, but could be even more dangerous if the new U.S. president makes good on her threat to launch a military invasion. Soon Jamey is front and center in a political and military struggle stretching from the Earth to the Moon.
1 Vote

In "Apollo's Outcasts" Jamey Barlowe and his sisters are woken up in the middle of the night by their father. Jamey has no idea what is going on but he soon finds out. His father, along with several other government workers, is a wanted "criminal" and has to avoid being captured.To keep Jamey, safe his father ships him off to the moon where Jamey, after being in a wheelchair all his life, learns to walk and takes part in a dangerous group called the Rangers.