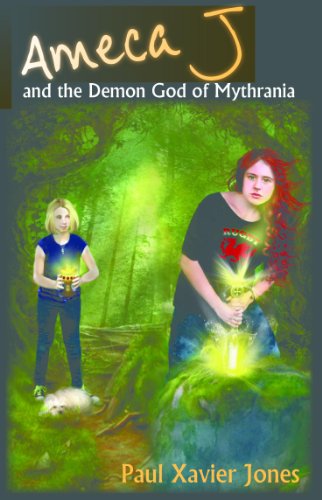 Ameca J and the Demon God of Mythrania
Paul Xavier Jones
Ameca and Fraya have done it; they have rescued their mother and brought their father back to life. Surely now it was time to go home?But the Scelestus is gathering its forces again for another determined assault on Mythrania, and this time it has a new weapon in its arsenal, one of the Heirs of Menindus.When their father dissappears after being accused of murder, the girls face an unsettling conclusion; somehow their father has turned to evil.As the armies of darkness gather for one final battle, Ameca is left with a choice that she had never dreamed she would have to make. A choice that will decide the fate of the Universe and change things forever...
1 Vote

I hope after you read this you will want to read the book. Ameca and Fraya are the main characters in the book; they are sisters. They love to go on adventures. They don't live in the same world as us. They live in a different world. A world, like a fantasy world, called Mythrania. In their world there are dragons. Ameca and Fraya brought their father back to life. The scelesus is taking over their home and claims it to be his home. Their father is being accused of murder and then he goes missing. Ameca, Fraya, and their mother were sent on a very unsafe journey to find him.