The Amberstone: Saving The Flame 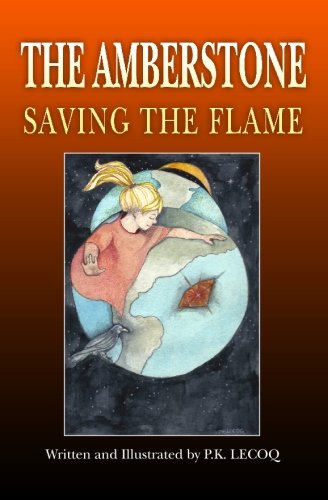 The Amberstone: Saving The Flame
P. K. Lecoq
With fascinating graphite illustrations, The Amberstone: Saving the Flame by new author P.K. Lecoq is a dramatic fantasy adventure that boasts dark whimsy and a message of perseverance. When thirteen-year-old Carrie is wrenched by a paralyzing magnetic force from her backyard into deep space and set down in a rock quarry on a distant planet, she is shaken and confused, but unhurt. In a dreamscape of mythic proportions, she stumbles upon the Amberstone and its imprisoned flame and vows to take it to the Great Wolf Spirit. It is a rigorous journey into the hinterlands of a strange world, but on the way she makes many friends, including Cristie and Ben. She meets Tilt, a pill-bug, and Cent, a camel cricket, and many other interesting characters. However, with only guidance from the flame, Carrie must make this astonishing and unforgettable adventure on her own.
1 Vote

Tweet
The Amberstone: Saving The Flame review by JMossm

In the early years of the Planet Vale, a healer named Alma is forced to become a flame inside an amberstone. When Carrie leans on a meteorite in her rock garden, she is pulled onto the planet Vale, where she finds the Amberstone. Alma speaks to Carrie, begging her to go to Lobo the Gray Wolf. Carrie and Alma have to brave an old manor, floods, and even friends.With the help of Alma, Carrie finds friends in places she never thought possible.