Allergic to Babies, Burglars, and Other Bumps in the Night 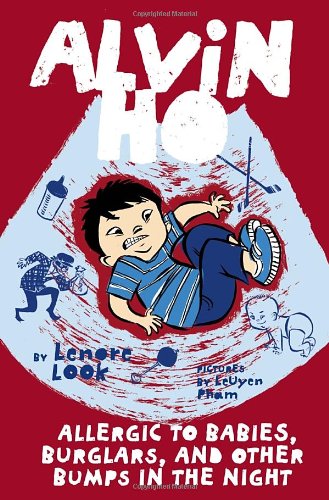 Allergic to Babies, Burglars, and Other Bumps in the Night
LeUyen Pham, Lenore Look
Here is the fifth book in the beloved and hilarious Alvin Ho chapter book series, which has been compared to Diary of a Wimpy Kid and is perfect for beginning and reluctant readers. Alvin, an Asian American second grader who's afraid of everything, has started to notice his mother getting bigger . . . and bigger. Alvin's sure it's all the mochi cakes she's been eating, but it turns out she's pregnant! There are lots of scary things about babies, as everybody knows. There's learning CPR for the newborn and changing diapers (no way). But the scariest thing of all is the fact that the baby could be a GIRL. As a result of the stress, Alvin puts on a few pounds and—in one hilarious misunderstanding—worries that he might actually be pregnant, too!From Lenore Look and New York Times bestselling illustrator LeUyen Pham comes a drop-dead-funny and touching series with a truly unforgettable character.“Shares with Diary of a Wimpy Kid the humor that stems from trying to manipulate the world.” —Newsday “Alvin’s a winner.” —New York Post
1 Vote

Tweet
Allergic to Babies, Burglars, and Other Bumps in the Night review by cowboys1

This was the 5th book in the Alvin Ho series.  Alvin is scared and worried of EVERYTHING!  That character trait is what makes Alvin so endearing and funny.  In this story Alvin notices his mother getting heavier and at first he thinks she is just eating too much.  Then he finds out that she is pregnant and that’s when his anxiety shoots into