The Alchemist War (The Time-Tripping Faradays) 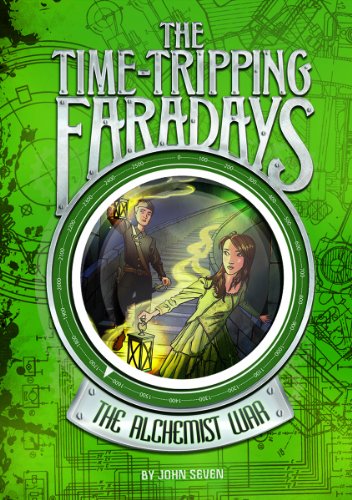 The Alchemist War (The Time-Tripping Faradays)
Craig Phillips, John Seven
When their parents, two temporal researchers who travel through time to document history, are transferred to 16th-century Prague, Dawk and Hype hardly expect to find themselves in the middle of an alchemical mystery. In fact, the new, boring job is meant to be a punishment for Dawk and Hype’s bad behavior at their last temporal post. The two teenagers are from the 25th century―how could medieval Prague compare? But when they meet a man who claims he can turn metal into gold, Dawk and Hype find out that Prague holds deeper secrets.
1 Vote

Tweet
The Alchemist War (The Time-Tripping Faradays) review by Laurenjanice

The Time Tripping Faradays is a short but good book by John Seven that will leave you on the edge of your seat. In this book the Faraday family travels through time and always has adventures. It's a book that gives you a new perspective on history and alchemists. When Dawk Faraday makes chaos in ancient Rome, the Faradays are assigned an assignment in Prague to convince the emperor that shoes are the next big thing. This may sound boring, but going to Prague will lead Dawk and Hype Faraday on a alchemist adventure filled with suspense.