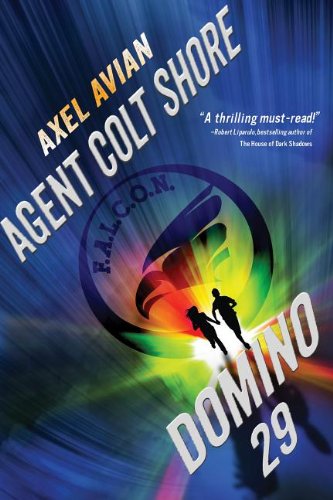 Agent Colt Shore: Domino 29
Axel Avian
When an ordinary kid learns he’s the heir to a secret agent dynasty, F.A.L.C.O.N puts him on a case to protect a famous rock group and find a missing journalist. Before he knows it, Colt Shore has gone from body guard to rock star to full-fledged agent when he learns that a human trafficking ring plans to kidnap a group of teenage girls. It will take more than his ingenuity and skills and a couple of cool gadgets to protect his new friends and rescue the captured girls before it’s too late.
1 Vote

This is a book about a teenage boy thrown into things he doesn't understand. His name is Colt Shore. He goes to a special school for secret agents. It is run by an organization called FALCON. As he is trained to be a secret agent, an active secret agent takes notice of him. The adventure that is started by their talk is an adventure Colt will never forget.