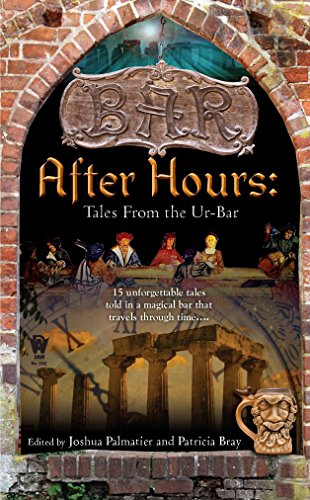 After Hours
Patricia Bray, Joshua Palmatier
Science fiction and fantasy readers have long shown an affinity for a good "bar story". Now some of today's most inventive scriveners have decided to tell their own tall tales-from an alewife's attempt to transfer the gods' curse to Gilgamesh, to Odin's decision to introduce Vikings to the Ur-Bar, from the Holy Roman Emperor's barroom bargain, to a demon hunter who may just have met his match in the ultimate magic bar, to a bouncer who discovers you should never let anyone in after hours in a world terrorized by zombies.
1 Vote

This book is an anthology of science fiction and fantasy short stories. The stories are by different authors, have different characters and settings, and are written in very different styles. However, the one recurring idea is the Ur-Bar, a bar that travels through space and time. Its bartender is the legendary Gilgamesh, who cannot leave the bar. The stories mainly deal with the lives of characters from various places and time periods. However, these characters interact with Gilgamesh to varying degrees during their stories.