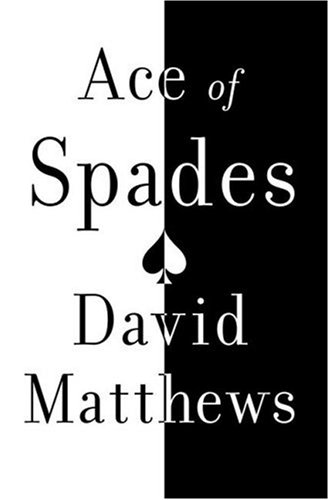 Ace of Spades
David Matthews
A take-no-prisoners tale of growing up without knowing who you areWhen David Matthews's mother abandoned him as an infant, she left him with white skin and the rumor that he might be half Jewish. For the next twenty years, he would be torn between his actual life as a black boy in the ghetto of 1980s Baltimore and a largely imagined world of white privilege. While his father, a black activist who counted Malcolm X among his friends, worked long hours as managing editor at the Baltimore Afro-American, David spent his early years escaping wicked-stepmother types and nursing an eleven-hour-a-day TV habit alongside his grandmother in her old-folks-home apartment. In Reagan-era America, there was no box marked "Other," no multiculturalism or self-serving political correctness, only a young boy's need to make it in a clearly segregated world where white meant "have" and black meant "have not." Without particular allegiance to either, David careened in and out of community college, dead-end jobs, his father's life, and girls' pants.  A bracing yet hilarious reinvention of the American story of passing, Ace of Spades marks the debut of an irresistible and fiercely original new voice.
1 Vote

Ace of Spades is an memoir of David Matthews's search for racial identity in an America that is obsessed with skin color. David Matthews was born on November 8, 1967 to a black nationalist father and a white Jewish mother. His mother was mentally unstable. Matthews's father had to rescue him from his mother. His mother then moved to Israel. David lived with his father and sometimes with his father's abusive girlfriends near Washington, D.C. for many years. David and his father then moved in with David's grandmother in Baltimore, Maryland.