What the Cat Dragged In review by CMy 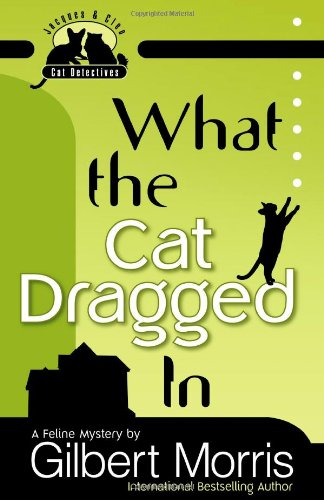 Jacques the Ripper and Cleopatra have to move with their humans to White Sands, Alabama, when they inherit a beachfront home. Cleo is a female cat that loves to be noticed, while the male, Jacques, is a rough, tough monster of a feline. Their owners, Kate and Jeremy, take them to the new house on the beach, which they will have to share with another relative, Jake Novak, who inherited a half interest in the house. They move in downstairs while he moves in upstairs. The catch to inheriting everything is that together they must care for the menagerie of animals that the old lady owned before she died, but things quickly get interesting when they learn Jake despises animals. Then a murder occurs, and Jeremy is the main suspect! Will Cleo and Jacques help solve this weird mystery and prove Jeremy isnt the killer?

WHAT THE CAT DRAGGED IN is the first book in the Jacques & Cleo, Cat Detectives series by Gilbert Morris. It centers on Jacques and Cleo, two cats who like to solve mysteries, and the lady who owns them. Since I enjoy suspense novels and I love cats, I thought this book was pretty good, even though it is really written more for adults than teens since it is about two adults falling in love. The book does include a couple teenage characters to provide interest for us teens. There wasnt very much action and the mystery was kind of boring even though I didnt solve it ahead of time. A few references to drugs, cheating, and sexual things make this book a more appropriate choice for adults rather than teens, however. There are two other books in this series, THE CATS PAJAMAS and WHEN THE CAT'S AWAY, which I will also be reviewing.