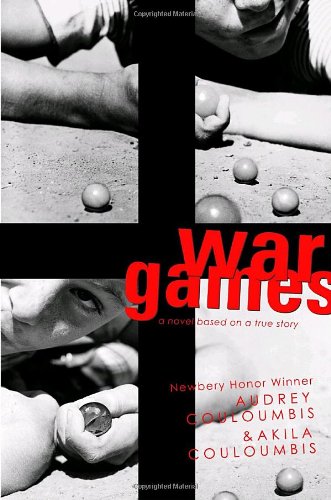 The small, Greek town of Amphissa was fearful. To the kids in the town, the war was a game. To the adults, it was inevitable. The adults just didn't know when they would get there. To Petros and his older brother, Zola, the war sounded exciting. They heard the stories of their cousin, Lambros, who climbed the tallest mountain in Greece and defeated the Germans. The stories always ended the same way; the Germans are coming to Amphissa. Most people in the town left out of fear, but Petros and Zola's family hid all their belongings that may be dangerous. The family prepared for the worse. Then one day, a jeep arrived at their house and a German commander starts living with the family. When anything can endanger their family, Petros and Zola have to grow up with the enemy in their home.

War Games by Audrey and Akila Couloumbis is a nonfictional story that was very anticlimactic. Most of the book was about the family and town waiting for the
Germans to arrive. There was too much detail about it and made the book boring. The book started to get interesting once the German soldiers arrived. The character traits of the German commander were surprising and significant. The German commander was not a cruel, mean, and the common stereotypical image people give of Nazis soldiers. The commander seemed to try to help the family. Considering this story was based off of a true story, it can change the stereotypical view and teach someone not to judge. Besides the German commander, Petros and Zola, the main characters, showed their distinct personalities well. Otherwise, I would not recommend this book to others because of its dullness.
Rating:
1
Content Rating:


Read more reviews by this Litpick Book Reviewer: MLoza_BRINDTO
Recommend this book and review to your friends on Facebook