Under the Sun review by CA 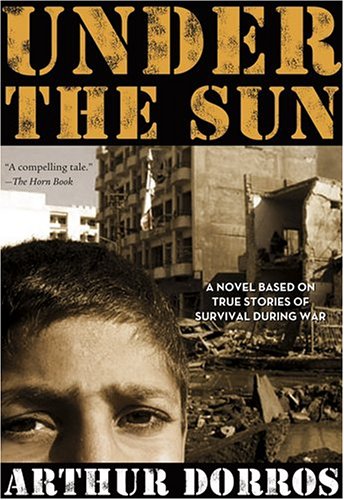 Ehmet lives in the Bosnian town of Sarajevo. During the war, the Yugoslav army and snipers had been firing at everyone there. Food, gas, and supplies were very limited due to the robbing of stores and the fact that stores were forced to go out of business. Then, his family decides to go to his aunt and uncle's house but his father stays and sends Ehmet and his mother ahead. Some men come to his aunt's house and his mother and Ehmet barely escape. His mother gets sick and dies on their way to his grandparents' house. He has to make it alone the rest of the way. He encounters many obstacles and some surprises.

I loved this book. There was always something happening and there was also a lot of detail. Dorros did a good job of keeping everything so unpredictable. I can imagine this being a true story. I especially liked the ending. This is the kind of book that sparks opinion. It makes you feel like talking to the book saying, "No, don't do that!" or, "Wow, he's lucky that he escaped them." I would recommend this book to someone who likes a good survival story and some action.


Read more reviews by this Litpick Book Reviewer: CA
Recommend this book and review to your friends on Facebook