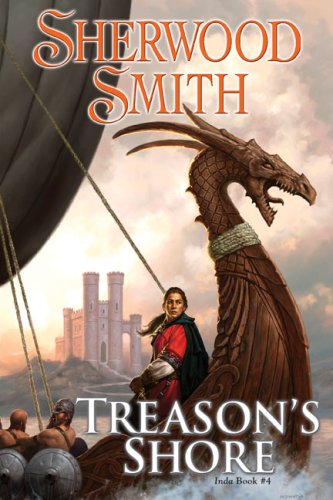 After being exiled for ten excruciating years, Inda finally returns home. He finds that his old classmate, Evred, has become the ruler of his homeland and is overjoyed to see his friend again. However, the kingdom he knew has changed. Evred wanted Inda to be his Royal Shield Arm-leader of the military-so that his now famous skills can be put towards defending the kingdom. Inda is a military genius, but his skills lay where the ocean is and is not suited for land. During this, the ancient kingdom of Venn is planning the largest invasion the world has ever known. Can Inda defend his homeland while gaining new responsibilities? Find out in Sherwood Smith's, Treason's Shore.

Treasons Shore was definitely a great, action-packed book. Treason's Shore is bursting at the seams with characters, events, and magic. This story of blocking an invasion kept me riveted to the page as though I were made of iron and it, the magnet. The book was a little slow in the beginning, however. I recommend this book to all those who search for adventure as they enter a library.


Read more reviews by this Litpick Book Reviewer: PHurl_Mineola
Recommend this book and review to your friends on Facebook