Thou Shalt Not Dump the Skater Dude review by PS 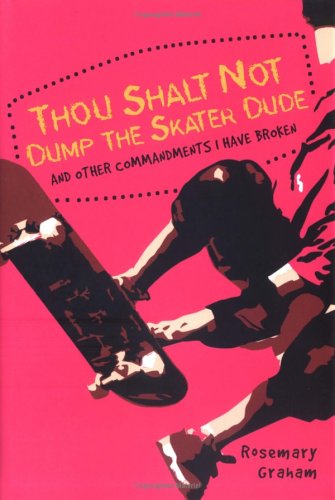 Kelsey has just been forced to move all the way from Boston to California during the worst time in her life, the beginning of 8th grade. She completes her year at a prestigious private all- girls school and realizes that she doesn't want to deal with snotty girls anymore. She decides to go to the public school, where she instantly gets recognized by the school celebrity, skateboarder C.J. Logan. Not long after, she becomes his girlfriend and gets to experience the perks of being popular. When Kelsey realizes that C.J. isn't putting in enough effort to be a good boyfriend, she dumps him after a year. But there's only one problem, C.J. has never been dumped before. So he spreads rumors about Kelsey around school and makes her miserable. But Kelsey tries to ignore them and becomes interested in the famed school newspaper, the Bee, and puts all her effort into making it as a journalist. When the rumors still affect her life one year later, Kelsey has to do something to stand up for herself before it's too late.

I was surprised at how much I liked this book. While I feel that younger teens would enjoy this book more, it was still entertaining to read. It was refreshing to read about a character like Kelsey. The story was really interesting too, even though the concept of a high school romance is common in many young adult books these days. I'd recommend this book as a fun, easy read to take your mind off things. The ending of the story made me want to know more. I don't know if the author is planning to write a sequel, but I know that I will probably pick up any other book that she writes.


Read more reviews by this Litpick Book Reviewer: PS
Recommend this book and review to your friends on Facebook