The Sphere of Secrets review by MRine 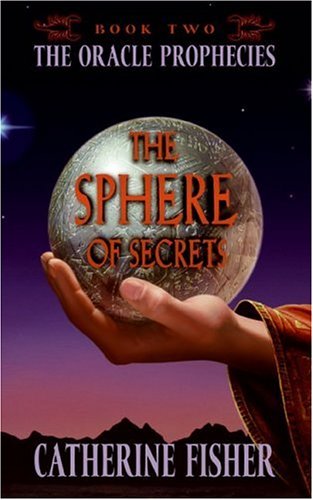 A god was reborn as a young ten year old boy named Alexos. He must travel to the Well of Songs and return three apples which he turned into stars. They must be returned to the Rain Queen, a god. Alexos had stolen the apples from the Rain Queen in one of his past lives. If he can make it across the unforgiving desert and fight the beasts that guard the well he can bring back the water to his kingdom. On his jouney he faces many predicaments. While he is away his kingdom is thrown into a war. His friend Mirany is one of the nine and works the altar of the god. Hermia, whom the god is supposed to speak through is making up the answers to the questions the people come to ask the god. She and the general of the army had formed a conspiracy. If someone was asking for something one of them was interested in they would decline. The rest of the nine have figured this out. When the prince of another country comes to ask the god to let his country mine in the mountains and is declined the rest of the nine tell him about their findings. War is soon waged between the two countries.

I thought that overall the book was very good. The suspense would not allow me to put the book down. Since there are two stories going on, one with Alexos and the other with Mirany, the author would switch between the two whenever an exciting event was about to happen. It about drove me nuts, but it kept me reading. I extremely advise you to read The Oracle Prophecies Book One: The Oracle Betrayed first. If you do pages 1-60 will make a lot more sense. I think the author used pronouns way too much. I would sometimes have no idea which character was being referred to. This was a very exciting book and if you are a fantasy fan you'll like this book.


Read more reviews by this Litpick Book Reviewer: MRine
Recommend this book and review to your friends on Facebook