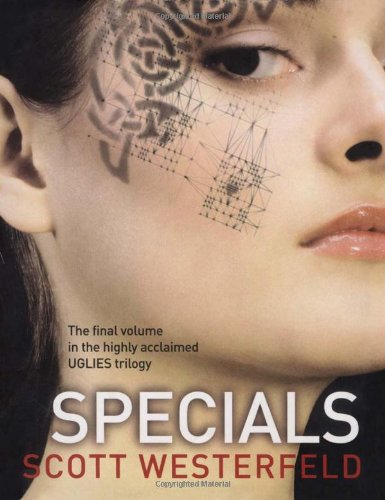 Specials, the third book in the Uglies trilogy by Scott Westerfeld, offers just as much intrigue and action as the previous two installments.

What if everyone in the world was pretty? What if things were more peaceful because of it? Would you conform to the norm or fight to be unique?

When Tally was almost sixteen, she was ready to get her obligatory operation, just as everyone else gets at that age. She thought the world was a pretty okay place and took her surroundings and standing in stride.

Then she learned that not everyone gets the surgery, some escaping to a safe haven known as the Smoke, where people look and live as naturally as possible. Forced by the authorities to visit the Smoke, Tally found herself siding with the dissenters - a decision that risked her life and the lives of those she loved.

After the smoke cleared - no pun intended - Tally found herself one of the Pretties, having undergone the surgery anyway, again under the thumb of those in power. At first, she did not know any better, but once she learned of their mind-altering surgeries, she fought back, this time stronger and smarter than before.

Now she is one of the Specials - stronger than she ever could have imagined, with special privileges and high- powered contacts. But at what price? Sure, she enjoys the power, the strength, the immunity - but she has been given all of these gifts from people who may not have her best intentions at heart.

One thing is for sure: Tally is no longer the blissfully ignorant girl she was a few years ago. She cannot be. She can, however, attempt to right some of the wrongs she has been a part of, and, in the process, change her life and her society.

Readers of Uglies and Pretties will not be disappointed. Specials delivers all that it should and more. The action sequences are packed with octane, an the writing is imaginative and descriptive. The ending of Specials will challenge readers to think, really think, about what they take for granted and what they should truly value.