The Shining City: (Book Three of the Warriors of E... 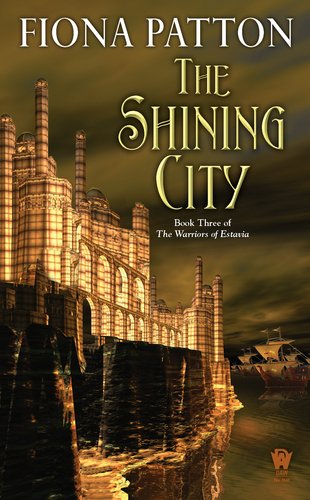 The Shinning City takes place in a world where Gods rule over the people who dwell inside the God-wall. A newly rising God, Hisar, must stake his claim in the world, but he is not without struggles. From the hovering threat of hungry spirits to the mortal battle moving closer and closer to Anavatan, it is even more important that he comes to his full powers. But he is not to fight the battle alone. Three children of prophecy: the seers Spar and Graize and the warrior Brax have sworn to help him if only they can get past the animosity and distrust among themselves in order to help the young God to survive. The third book in Fiona Patton's Warriors of Estavia is a thrilling and mystical adventure cast in a fantastical world that expounds the bond between gods and men.

This book by Fiona Patton is well written and an enticing novel that caught my eye just by the title. Patton will blow you away with her dexterous descriptions and delectable dialogue. It is a dense book that requires the reader to pay attention. Therefore, I would recommend starting with the first book of the trilogy to prevent getting lost in the complex prophecies and characters. Patton has created a new world that is both mysterious and enthralling. This fast-paced novel will not leave you disappointed.


Read more reviews by this Litpick Book Reviewer: ESabo0912
Recommend this book and review to your friends on Facebook