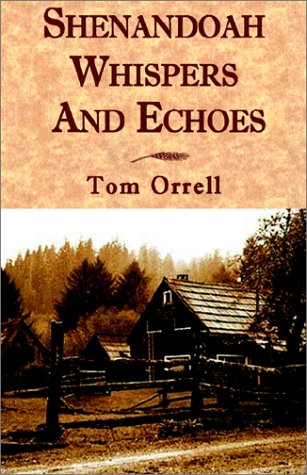 Tom Orrell's "Shenandoah Whispers and Echoes" is a narrative embedded within an account by Steven Dickenson, a Virginia newspaperman that was given an old journal. Dickenson, interested in the journal, agrees to read through and prepare for publication the diary of James Randolph Wise of Staunton, Virginia. Wise, born a decade preceding the Civil War, writes a vivid account of his and his family's life through the upheavals faced by common people during and after the Civil War. Wise's moving tale progresses through the first 47 years of his heart-breaking life where tragedy upon tragedy rules his life; his brother, Shelby, dies fighting for the Confederacy, Union troops destroy his father's farm as General Hunter destroyed the Shenandoah Valley, and both his beloved wife and sister die during childbirth. Eventually his parents die, leaving home alone. However, his father, before passing on, tells him of gold that his brother had found in the California gold rush years before. Locating the gold, Wise pays debts and sells the farm to move to town and make a life with the masonry he loved to word with. He makes a successful business and marries Beverly, a widow living with her mother. Wise is happy for a couple of years until tragedy strikes again. Left alone once again, he decides to travel the country, meeting people and expanding his horizons. Infused with enthusiasm upon returning home to his beloved Staunton, he returns with a positive outlook and truly helps Daniel Jefferson, a former slave who also lost his family. Wise becomes a philanthropist, living a life of giving for satisfaction.

Tom Orrell's presentation of Shenandoah Whispers and Echoes reveals history, especially the Civil War, in a manner people in any age can relate to. The novel is a quick and easy read that really impacts both through the tragedy and the positive outlook shown by James Wise. The ending really satisfied me and made the novel worth reading. Wise serves as a good narrator because of his constant telling of what went on around him and the opinion of others, a really important part of any historical novel. I enjoyed this view of the famous Shenandoah Valley and learned a lot from the book, both historically and about humanity. I look forward to reading more of Tom Orrell's work.


Read more reviews by this Litpick Book Reviewer: SAs
Recommend this book and review to your friends on Facebook