Say You're One Of Them review by KKni 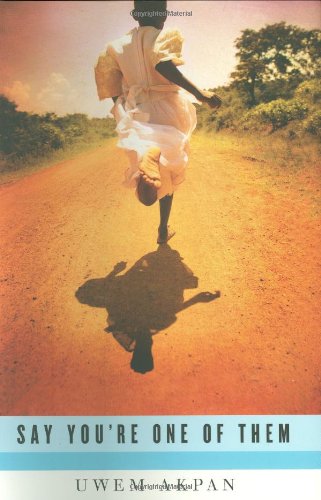 Say You're One of Them is a collection of short stories by Uwem Akpan. In the first story, An Ex-mas Feast, a poverty-striken family living on the streets of Nairobi, Kenya struggle to overcome hunger. In Fattening for Gabon, two siblings living in Benin with their uncle are suddenly blessed with a small fortune by their godparents. But things take a turn for the worse when they realize that they are thick in the middle of a plot to be sold into slavery. What Language is That? is about two friends who are torn apart by thier religious differences and must learn to cope in an Ethiopia where civil war is a rising threat. In the next story, Luxurious Hearses, sixteen-year- old Jubril is a Muslim refugee who must flee from Northern Nigeria to the South because of a religious civil war which has begun to tear apart his country. To accomplish this he must attempt to conceal his identity as he embarks on a treacherous trip on a bus filled with Muslim hating Christians. The last story, My Parents Bedroom, is about a family in Rwanda who risks everything they have to save the victims of a terrible civil war.

Say You're one of them was one of the most difficult books I have ever read. The author did an incredible job of revealing the lives of children in Africa- the unimaginable pain and suffering and how hope can prevail in even the very worst of situations. The way he used points of view was very unique and helped give a peek into each person's world. In the story What Language is That?, he used second person. I had never read a story in that point of view before and it really made me feel like I was part of the story. I enjoyed the book, but each story had a sad ending and though they inspired me, I walked away feeling kind of depressed. It helped me to realize that even though life isn't perfect, I still have it a lot better than most people. I would reccomend this book only to mature teenagers and older because some of the parts are rather graphic.

There was some strong language used and mature subjects, such as rape. It also contained some gore.
KEYWORDS


Read more reviews by Litpick Book Reviewer: KKni
Recommend this book and review to your friends on Facebook