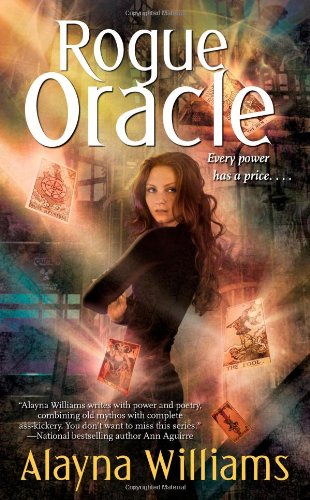 "Rogue Oracle" is the second book in this series that follows Tara Sheridan on her adventures in the world of crime and oracles. Tara is a cartomancer, one who reads tarot cards, and they guide her. This book begins with Tara interogatting a suspected terrorist named Zahar Mouda. When she consults her cards they come out with the fool,seven of cups, and the lovers. About this time some one walks in on her and it turns out to be her own lover Harry Li coming to her for help. He is investigating the disapperance of operatives for a operration know as "Rogue Angel". But they are Special Projects, a branch of the DOD, is at a loss and Harry hopes that Tara can help them. She returns to the farm house of the order of oracles known as Delphi's Daughters so she can pack and tell Cassie she is leaving. Cassie is the future Pythia, or leader of the Delphi's Daughters. Soon another operative disappears, but they find their first real clues. First a top of blood that contains DNA from the victims, and inside the blood are large levels of radiation. The culprit is soon traced back to a survivor of Chernobyl with sinister plans. He is dying, but before he dies, he wants to have the rest of the world feel his pain. To find out what his plans are and if he succeds read "Rogue Oracle" by Alayna Williams.

"Rogue Oracle" is an original story full of adventure, mystery, magic, and underlying tones of romance. This book was very well written and made me feel like I was actually in the story. It also had very memoriable characters who work together perfectly in the plot of this story. Tara is a daring heorine who cares greatly about protectting those around her no matter what the cost. Harry is a truely uniqe character; he works to protect his country but is slowly having his job change him to the point it is almost frightening. Galen was born in Chernobyl but radiation changed him until he bacame a monster who in his dying days wants to make others feel his pain. And last, but not least, is Cassie a 20 year old woman who is destined to be the next, even though the training can get a little gruesome sometimes. I would recomend this book to any teens looking for a good read.

There are sexual themes that are not suitable for children.
KEYWORDS


Read more reviews by this Litpick Book Reviewer: JDavi
Recommend this book and review to your friends on Facebook