Return to Zandria review by CMy 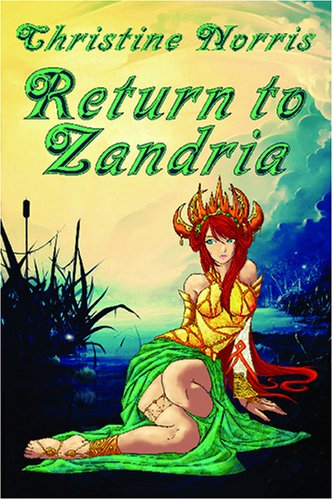 It's been three long years since Ivy Peterson last saved the world of Zandria from total destruction by the evil witch queen, Zahara. Ivy is once again faced with the challenge of saving the Talisman and the future of Zandria, but this time it's with a new twist. She has her best friend Lori with her and the empress's fairly newborn daughter's life is at stake. Without very much hesitation, Ivy and Lori, both agree to embark on the life-threatening adventure. A few days after setting out on their dangerous journey, they realize that they are being followed. As they prepare to attack the oncoming stalkers, they recognize the one person as Queen Siobhan and her guards. Queen Siobhan leads them to the Water Gate and from there they cross over into Otherside, where they have reason to suspect it as being the place that the Princess is being held captive by Duke Drake (the empress's cousin.) After coming through the portal, they exit the cave that they were transported into, and waited for the cover of night to explore. They headed into the small village within a few days of being there, and asked a supermarket owner a few questions, and found out that Drake is somewhere in the premises of the "haunted" and abandoned beach house offshore. They leave the store and head back to the cave. On their way there, Ivy decides to wash-up in the restroom, and tells her friends to wait for her outside. When she comes out, no one is around and it is uncomfortably too quiet. Without warning, a man she doesn't recognize comes around the corner of the building and chases her through the woods. She trips over a log, and falls to her destiny, which is being captured, tied up, blindfolded, and carried through the woods to his master's secret lair. She doesn't know where she or her friends are, who took her, or what the fate of her and her friends, the princess, and the whole world of Zandria will be. Everything rests in the very evil hands of her wicked captor and his psycho master; and whatsoever they choose to do with her is entirely up to them, no matter what it may be.

The Return to Zandria by Christine Norris is a wonderful story and it's the sequel to The Talisman of Zandria, which also was a fabulous book. I think that this is about as awesome as the first one, but it doesn't have quite as much adventure and action as the first one did. It was still an exciting read though, and it kept me guessing as to what would happen next the whole time. The plot was very interesting and the author chose a good conflict to write about. The climax was pretty intense and I wasn't sure what was to become of the characters. I enjoyed how the author had Ivy's friend go along on the adventure because it made it all the more interesting, definitely since she was a girlie-girl. Overall this novel is a remarkable and outstanding book and a great pick, if you want to add some excitement to your life.