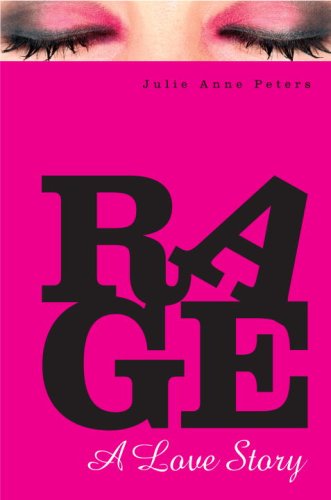 Johanna Lynch is a senior in high school. Life is stressful for her because both of her parents have died, and her sister doesn't talk to her much after Johanna confessed that she is a lesbian. Every day Johanna admires Reeve Hartt, but she would never speak to her. Reeve is also a lesbian, but Johanna never thought she would have a chance with her. While Johanna is tutoring a boy with autism named Robbie Inouye, she finds out that he is Reeve's brother. One day Johanna finally gets the courage to talk to Reeve and from then on, they hit it off. Johanna learns personal things about Reeve and never gives up on her.

Rage was one of the best books I've ever read. I could picture everything that Julie Anne Peters said. I was able to understand the life of an abusive love and the difficulties of being different. I had trouble putting the book down. I was absorbed with everything that happened. I learned how different life is for people that aren't as fortunate as me. Sometimes i think that I have it rough, but what I deal with is nothing compared to what Reeve Hartt went through. I would recommend this book to anyone who wants to learn more about the struggles of lesbian teens, and abusive relationships. The ending shocked me because I really didn't expect that to happen. If you want to read this book, I advise that you are at least 16.

This book has inappropriate language in it. It talks about drugs, sex, and abuse.
KEYWORDS


Read more reviews by this Litpick Book Reviewer: smajor_jmajor
Recommend this book and review to your friends on Facebook