The Printer's Devil review by KA 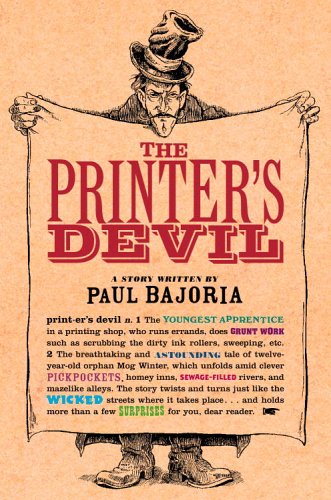 It all starts when the Printer's Devil is making wanted posters of an ugly convict named Cockburn. Mog Winter had stayed up late one night after printing 100 copies of the poster. Once done with that, the orphan had to deliver a bill to one of Mr. Cramplock's customers (he's Mog's employer). The man who is to receive the bill's name is Mr. Flethick. Mog finds Flethick in his room with several other men smoking and speaking of things like "The Sun of Calcutta" and "The Bonsun". Before you could blink and eye Mog is whisked away in a grand adventure involving thieves, camels, deception, and a mysterious past.

I thought that "The Printer's Devil" was good, but definitely a book you might want to use a notecard as a bookmark to keep track of who's who. At times it can be dreadfully confusing as to who's doing what and how they're involved in the first place. I thought the writing was inconsistent at times. One chapter would be smooth and the next it would take a while to catch up with the plot line. It was almost as if you missed something important. Warning: When reading this book be prepared for the weird little twists and turn that could utimately change the plot for somthing totally different. Assume nothing.


Read more reviews by Litpick Student Book Reviewer: KA
Recommend this book and review to your friends on Facebook