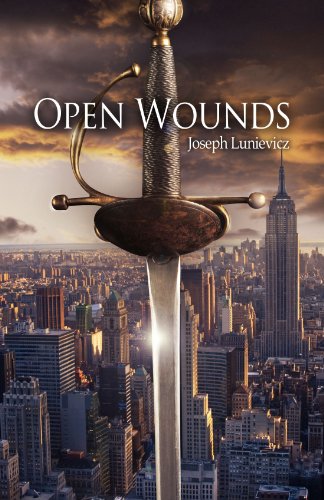 Growing up in Queens in the 1930s with a drunken abusive father and a strict grandmother, Cid Wymann hasn't had a lot of exposure to the outside world. This changes when he, one day, sneaks out to follow his grandma to church services. When he arrives at a movie theatre, he threatens to tell unless she lets him see the show with her. There, he watches Captain Blood, a dashing swordsman, and his dream of becoming a fencing master is born. Cid eventually becomes friends with two boys as they unite to battle the bullies in their neighborhood. As Cid grows up and his father goes missing, he is placed in the custody of his cousin, a disfigured war veteran called Lefty. Cid begins to learn fencing from Nikolai Varvarinski, a Russian sword master, and faces new challenges, develops new relationships, and starts to discover who he truly is.

This book was a sad, but exciting, coming-of-age book that kept my interest until the very end, as well as after I had finished it. It dealt with many different issues such as World War II, culture differences, poverty, and drug reliance in a manner that helped you feel as if you were living in the 1940s with Cid. The setting and mood was mostly dark, but it fit the plot well. Times were tough, Cid fended for himself, but the overall feel of the book had an edge of hope that made the reader cheer him on as he faced his enemies: some human, some within himself. Cid and all of the characters were all very believable. Cid was violent, he got into fights like teenage boys do, and he acted like you expected him to after getting to know his personality traits. The story is told from Cid's perspective, which fits the style of the book. It is intense, powerful, and very interesting. The author ended the story almost abruptly, but it fit with the plot. I loved the whole book: Cid's confusion and heartbreak, all of his struggles that built his entire character. I felt like I could have been his best friend. I would recommend this book to anyone who would enjoy an intense page-turner.


Read more reviews by this Litpick Book Reviewer: RHanse
Recommend this book and review to your friends on Facebook