My Unfair Godmother review by KBand 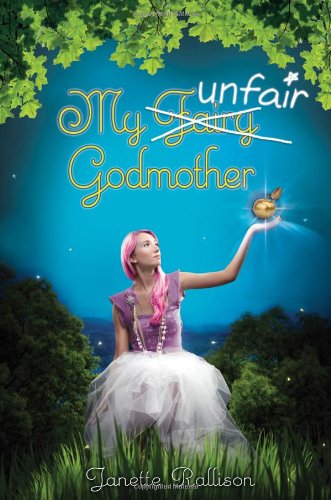 Tansy is just a regular teenage girl, her parents are divorced, and she feels her father doesn't pay any attention to her anymore. In a desperate attempt to get some attention she dates the bad boy in school, but getting caught vandalizing a building on a date wasn't the kind of attention she was looking for. Her pathetic meter has reached an all time low, so along comes Chrissy, a fair godmother that comes to rescue her by granting her three wishes. Those three wishes don't go as planned though, bringing Robin Hood to the twenty-first century was pretty bad, but being transported back to the Middle Ages to recreate the story of Rumplstiltskin was worse. Luckily, she has the help of her family and the cute police chief's son, Hudson to help.

My Unfair Godmother is funny, entertaining, and romantic. It is a unique story, which makes it unpredictable. The characters were very charming and original. The main character Tansy was relatable and likeable. The relationship with her and Hudson wasn't too over the top. I liked that she didn't make the two immediately fall in love, instead she made the relationship develop over time, and had them actually not like each other very much in the beginning. The fairy Chrissy made me want to read on in the book. Her quirky personality and funny banter with the leprechaun got me laughing. Overall I enjoyed reading this book because it was something fresh, new, and entertaining.


Read more reviews by Litpick Book Reviewer: KBand
Recommend this book and review to your friends on Facebook