The Misadventures of Maude March review by SMo 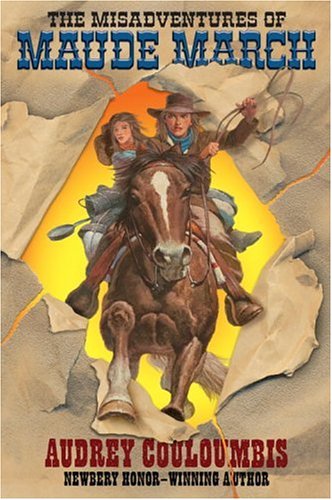 "Mad Maude March," is supposedly a robber and a murderer who roams the wild west with her gang. Her younger sister Sallie knows better. She knows the ladylike Maude who was orphaned twice and misses their parents, their aunt, and the house that they lost when she died. Together, Sallie and Maude are forced to flee from their hometown to avoid Maude marrying a man that is old enough to be her grandfather. They commit some wrongs, many of which they either didn't start and were blamed for or were accidents that were embellished. However, throughout their journey to Independence to find their Uncle Arlen (that could be dead, or somewhere else entirely) Maude and Sallie hold a sisterly love and determination that just might get them to their destination. This is Sallie's story; a story of the wild west.

The Misadventures of Maude March is a tale that is expertly woven to depict an eleven year old girl, who through her love of dime novels, believes she can conquer the West with her sister in tow. The words paint vivid pictures and the story leaves readers on the edges of their seats wondering what else could possibly go wrong. Any lover of Wild West adventures and stories told from a different perspective than anyone expects, will love Audrey Couloumbis's novel. Maude March is a new hero of the Wild West, as real as Joe Harden and all of Sallie's favorite dime-novel characters.


Read more reviews by this Litpick Book Reviewer: SMo
Recommend this book and review to your friends on Facebook