The Mermaid's Madness review by KyByd 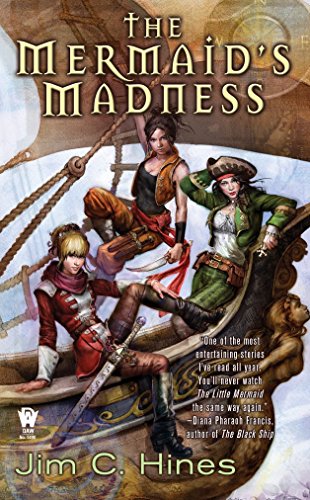 The Mermaid's Madness
by Jim C. Hines
Age Range - 12 and up
Genre - Fantasy

When Queen Beatrice's soul is ripped from her body by Lannadae, the Mermaid Queen, three princesses set out to save her. Danielle, Cinderella, is naive but she is armed with the skill to communicate with animals. Talia, Sleeping Beauty, doesn't act like a princess as she kicks butt with her supreme fighting skills. And Snow, Snow White, an amazing sorcerer with the ability to heal. The result is a magical action adventure story filled with princesses and mermaids cleverly spun from 'The Little Mermaid' tale (along with three other fairy tales) by Jim C. Hines in The Mermaid's Madness.

Opening up The Mermaid's Madness I noticed a heading called 'Other Books in this Series' and saw another books title above this one. I normally read stories in order for I feel that that is the way they are supposed to be read, but lucky for me I gave this book a chance. Although it was clear that this book had a prequel, because there were references to a past adventure, Jim C. Hines was able to work in the character's background without messing up the flow of the book.

It was a good thing that I received this book on a Friday because I couldn't put it down. The plot hooked me in right at the beginning and kept going strong until the very end. It wove together action scenes, that made me sit on the edge of my seat and yell at my book, and emotional scenes that brought the characters to life, making me feel for them. Hines cleverly took well known stories and transformed them into an epic tale filled with girl power. Now I plan to read this series' previous books as well as the next one because The Mermaid's Madness is now officially on my favorite books list.


Read more reviews by this Litpick Book Reviewer: KyByd
Recommend this book and review to your friends on Facebook