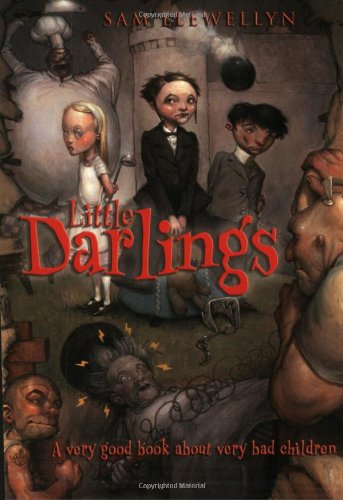 "Little Darlings", written by Sam Llewellyn, is the story of three naughty children, Daisy Darling, age 12, Cassian Darling, age 11, and Primrose Darling, age 10, and their life changing adventure. Their mother left when they were young. They live with their father and stepmother, but don't interact with the parents at all. Instead of having their parents take care of them, they have nannies. With Daisys nanny-hating skills, Cassian's engineering skills, and Primrose's deadly cooking techniques, the Darlings manage to scare off eighteen nannies, putting them on the nanny blacklist, which makes it nearly impossible to find a nanny. The parents' last chance at finding a nanny turns out to be a group of criminals who dress up as nannies to steal pieces of their fellow worker's bear, which the Darling residence has a piece of. Without intending to, the children end up on the ship where the criminal nannies live! With the permission of the captain to stay on the ship, the children become right at home. Cassian works on the engineering of the ship, Primose gets right at home in the kitchen, perfecting her cooking skills, and Daisy begins training the criminals how to become proper nannies, so they won't give up their true identity. The criminals and a group of builders compete to find missing pieces of a stuffed bear that was divided in the past to receive an award from the ship's chief. The Darling children help the criminals disguised as nannies. Unfortunately, both the builders and the criminals each find three pieces of the bear and are forced to a challenge. The challenge is a fight with one chosen person on each side. The winner receives the entire bear, and the loyalty of the former King of Iceland. Find out how the Darling siblings, Daisy, Cassian, and Primrose, use their skills to aid the criminals and learn the true story about their mother.

If there was ever a more surprising and uniquely interesting book, I would be in shock for days. Little Darlings, written by Sam Llewellyn, is a great book to read if you like unexpected turns in a plot, mysteries being solved that you hadn't even thought of, and three mischievous children saving themselves and their close friends and family in the most unique and humorous ways possible. You might get confused about the plot and who everybody is in the beginning, but DO NOT STOP READING the book, because soon enough you will be so into the book that you won't be able to put it down. There has never been a character in a book so creative and interesting to read about as the youngest sister in the Darling family, Primrose. Primrose takes over the story with her mischievous charm and well described baked treats. The most unexpected ending I have ever seen occurs in this book. The adventures of the characters don't stop until the very last paragraph in the book. It is amazing how well the ending caught you by surprise. This book made it to the top of my favorite book list with its highly unique style. In the most creative way possible the book teaches you to enjoy your family and make the best of your childhood memories, because some families, like the Darling family in Little Darlings, don't interact at all. In fact, in some families the children never see their parents and their parents don't notice whether the children are at home or not! There were plenty of vocabulary words appropriate for the age group it was written for, but there were a few too many slang words by the criminals. The way the plot twisted and turned made it so you could read Little Darlings many times and be surprised each time. It was nice that the author solved all the mysteries and questions. The only thing I would change in the book is the way that some of the sentences dragged on, making it confusing to follow along with what was happening in that particular sentence. Despite this, Little Darlings is a very exciting book.


Read more reviews by this Litpick Book Reviewer: MP
Recommend this book and review to your friends on Facebook