The Kingdom of Little Wounds review by bookgirl128... 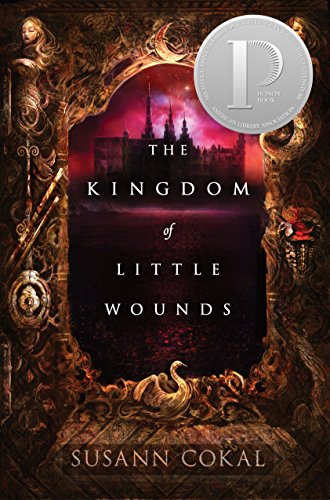 In the imaginary Scandinavian city of Skyggehavn in a time that seems to be the Renaissance, three women--the seamstress Ava Bingen, mute nursemaid Midi Sorte, and mad Queen Isabel--must try as best they can to survive the deadly sickness that is raging through the court. As one royal heir after another dies, the situation grows evermore dangerous. What no one knows is that the royal sickness is unstoppable because it originates from the Queen herself. As the kingdom’s hopes rest on the new royal baby, and no one knows that he, too, is diseased, Ava and Midi are facing their own problems as they try to survive the terrible plots that put the whole court at risk.

I chose this book because I like historical fiction, and I am very interested in how disease was viewed in the past. But this story ended up being very, very different from what I had hoped it would be. It is definitely not a fairy tale or fantasy, even though the cover is beautiful and the design of the inside of the book is gorgeous, too. I read the author’s note at the end before I began to read, so I knew that the disease that was threatening everyone was syphilis. The parts about syphilis were actually very interesting to me, especially the ways that people at the time tried to treat it and the ways they thought that it was spreading.
I was not prepared for the very graphic violence in the book, which made the story more disturbing than interesting. The female characters suffer terrible violence such as rape and torture (in the case of Midi). I think that this is probably realistic for the time, but it really took away from any potential enjoyment that I might have gotten from the book. The author is a very good writer but the story itself is too dark. I would give the overall book only three stars because it was so unpleasant to read and because I think it was a mistake for this book to be listed in the young adult category. I also found all of the characters unlikeable, which made it hard to keep reading.

The publisher’s website lists this book as appropriate for ages 16 and up, but I think that it should have been an adult book. It is not a “young adult” novel because there is too much graphic violence and sex in it. ( I really think that the back cover description should have contained more of what the book is actually about.)
KEYWORDS

Read more reviews by Litpick Book Reviewer: bookgirl1289
Recommend this book and review to your friends on Facebook