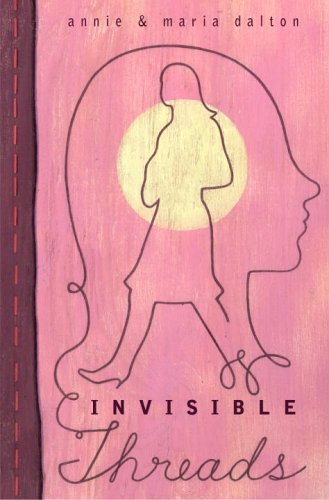 Invisible Threads, by Annie and Maria Dalton, is the story of a mother and daughter dealing with all the trials and tribulations that they went through when they were 16. Carrie-Anne is having trouble at home trying to get along with her adopted parents, and trying to find her place in the world. She thinks that if she has a chance to find her biological mother, she could get a better sense of who she is and where she's from. Meanwhile, Naomi, Carrie-Anne's biological mother, tells us the story of when she was 15. She lived with her unsteady mother, trying to keep a grasp on reality, trying to be a normal teenager, but always having to comfort her mother after her mother had a sort of mental breakdown. After Naomi's mother found an on again-off again boyfriend, Naomi decided that she shouldn't have to be her mother's babysitter. She chose to go have some fun at a party with some of her friends, and did something she knew she shouldn't have done. So Invisible Threads takes us on through their separate journeys, reminding not only Carrie-Anne and Naomi, but also the reader that even if we may not want to acknowledge it (as in Naomi's case), we are all connected by invisible threads that make up our family tree and our history.

This was a very good book. It really took you through all the controversy and all of the emotions that Carrie-Anne and Naomi went through at specific moments in the book. I thought that Invisible Threads was very well written, and anyone who's ever been seeking answers to who they are and where they came from should read it. I recommend, though, to be about 13 or 14 before reading this book.


Read more reviews by this Litpick Book Reviewer: KK
Recommend this book and review to your friends on Facebook