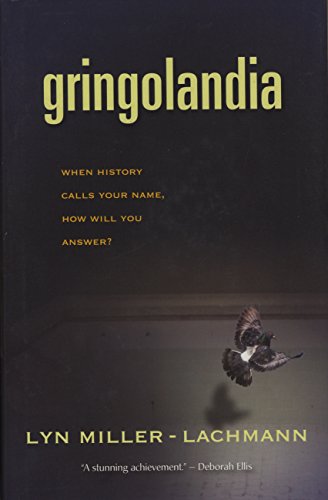 Daniel Aguilar has moved to the United States as an outcast. His father, Marcelo, was arrested in Chile for political reasons, and like so many other political prisoners, tortured. Released after five years in prison, Marcelo is allowed to return to his family in the United States. Marcelo is not the Papa who Daniel remembers though; while being tortured, Marcelo became partially paralyzed. Daniel wants to reconnect with his father, but can not. His father yearns for Chile, and Daniel soon gets caught up in this longing.

Gringolandia tackles a hard subject to talk about openly, but Miller-Lachmann does it extremely well. The characters are well crafted, each with their own unique personalities, which I understood and liked. Marcelo, Daniel, and Courtney Larkin may not have magical powers, but all three have the power of hope for the country Chile. While Daniel and Courtney tell the story, Marcelo is the glue that holds the story together. His experiences in Chile are revealed in a steady trickle throughout the book, right up until the end. The horror of these events kept me glued to the book, waiting for the wrongs done to Marcelo to come around to the people that organized them. Gringolandia may not be about princes, wizards, or princesses wanting to be rescued, but tells the story of three independent people that believe in themselves.


Read more reviews by this Litpick Book Reviewer: KBarb_BRINDTS
Recommend this book and review to your friends on Facebook