The Greenstone Grail review by SMo 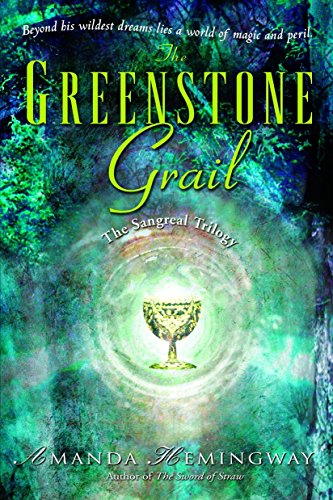 A world is dying. Its only chance for survival lies with a Great Spell that nobody knows how to perform. What they do know is that they need three objects of power- a cup, a sword, and a crown. Strange things are happening in Eade, a peaceful English town that is home to a boy called Nathan. Nathan has dreams of a world that is contaminated by magic. He gradually realizes that he is dreaming of a real world, a world completely different from his own. The Grimthorn Grail is a cup that once belonged to the Thorn family that is said to have strange powers. The only remaining Thorn descendant wants the cup back and is trying desperately to prove that the original sale was illegal. As Nathan's dreams become more and more real and he learns about this other world, he realizes the fatal problems that it is facing. The cup comes from the other world, he is sure of it, but he also thinks that it was sent to his world for safekeeping until a need to use its powers arose. Where does the cup truly belong? Can the world be saved?

"The Greenstone Grail," is the first novel in a trilogy, each focusing on in turn on one of the three powerful objects, each full of unanswered questions. Vivid descriptions bring the story to life as Nathan, his mother, and his best friend discover knew dangers and complications in their quest to set things right. Amanda Hemmingway weaves the story of a world that has an unbelievable problem and a young boy who just might have the power to set things right. Advanced mystery readers will enjoy the many unanswered questions of the book as each different character encounters fears and problems of their own.


Read more reviews by this Litpick Book Reviewer: SMo
Recommend this book and review to your friends on Facebook