The Golden Fleece review by AYay_RPEMS 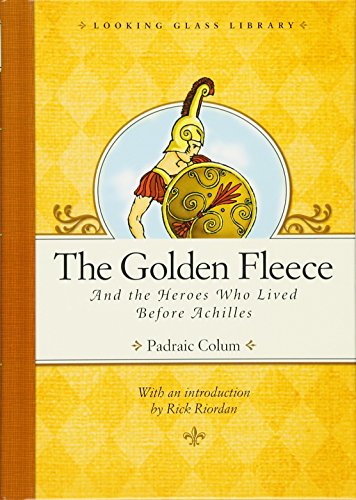 In a land far away, in a place known as Greece, there are great heros. And once upon a time, a youth named Jason was born. Chiron, the king centaur, took him up to raise him. With Chiron, Jason learned how to hunt, and how to be a hero, because Chiron knew that Jason was under careful watch of Hera. Hera was the goddess of marriage and the queen of the gods. Then when Jason grew up, years later, he went on a quest to find the Golden Fleece of Poseidon. He got together a group of other heros that lived in Greece to go with him. Jason, Hercules, Orpheus, Atalanta, and many other heros must find the Golden Fleece and return to Greece safely. Will Jason and his crew be able to retrieve the Golden Fleece and come back home safely? Find out in The Golden Fleece by Padraic Colum.

This book is a reissue of a book first published in 1920. I thought this was a pretty good book because of the language the author uses. He writes in old English so the reader must try and determine what some words mean. I like this because you have to work out the words he uses. With his book, he inspired many people to write down other Greek myths. Rick Riordan was inspired to write the Percy Jackson stories because he read this books as a child. The author tries to make it as similar as he can to the original stories of Jason and the Golden Fleece. If you like Greek mythology and love a good book, then this book is for you.


Read more reviews by Litpick Student Book Reviewer: AYay_RPEMS
Recommend this book and review to your friends on Facebook