The Girls They Left Behind review by BS 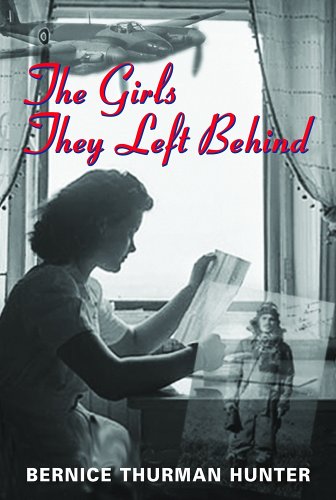 In a story drawn from events in her memoirs, Bernice Thurman Hunter uses potent realism in day by day descriptions to tell the story of one girl's transition to womanhood in the "greatest generation." The Girls They Left Behind tells about a young Canadian girl named Beryl who has to sit and watch friend after friend depart from Union Station to go off to war, leaving her behind. When even her cousin Carmen leaves, Beryl decides to move on with her life, and stand silently waving goodbye at the train station no longer. Changing her name to Natalie (deciding her other name is "not fit to print"), she gets a job helping the war effort. The things she learns from her correspondence with her "war boys" and daily life with others "they left behind" make up the heart and soul of this novel.

Tiny details like descriptions of blackout curtains, buying of war bonds, and letters that arrive unreadable because of censoring provide realistic descriptions of civilian life in wartime; while other details also keep the story rooted in the forties, like when Beryl (oops, Natalie) has to wash her hair with Sunlight and vinegar because of shampoo rationings, or only buy food with certain kinds of ration stamps, or when she and her friends paint their legs with bronzers and draw a line up the back of their legs when they can't afford to buy pantyhose stockings.

But the book isn't just a period piece. The story it tells of love and sacrifice and family is one just as important as any war novel about the heroism of soldiers in battle. While it may be directed to an audience primarily of girls rather than boys, it doesn't mean that anyone couldn't enjoy this easy-to-read, difficult-to- put-down story based on true events. I would recommend it as a good coming of age novel, and wouldn't be surprised to see it on teachers' lists to be used as a jumping off point for study about the Second World War. At not even 200 pages it is an easy read, but with a meaningful sentiment that is difficult to forget.


Read more reviews by this Litpick Book Reviewer: BS
Recommend this book and review to your friends on Facebook