The Fugitive from Corinth review by LSpro 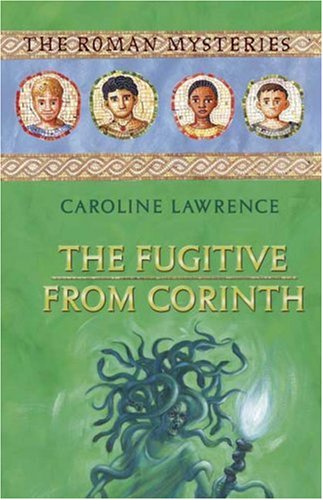 Flavia's father is severely injured one night, and the only suspect Flavia has in mind is her own tutor. Nubia, Jonathan, and Lupus (and later on, Megara) join her in her pursual of him, through unknown terrain, and various cities. An oracle tells Flavia's messanger with a rhyme, which none of them can figure out, and the group dismisses it after a little thought. Before that, though, they'd met a young beggar boy, who seems a little odd, but was otherwise a great help in some ways and a great bother in others. Later on, the boy revealed himself as a girl, Megara, who had more information on the tutor and his brother than any of them had imagined. It's finally in the cave of the Furies that they catch up with the tutor and his brother, who both have stories to tell. It turns out that no one had intended to hurt Flavia's father, and they all run back to Corinth and find him awake and live happily ever after.

I think that the book was a little childish and mainstream. The murder mysteries that end up with everyone living happily ever after, when it shouldn't happen are a little annoying. Other than that, Lawrence delivers the tale in a slightly more interesting way- this takes place in ancient times. With a change of character, setting, and behavior, an otherwise boring tale is made slightly more interesting. Some parts are a little bit strange- like, they just happen to meet a little beggar boy who just happens to be a girl who just happens to know a hell of a lot of stuff about Aristo. But otherwise, it's not that bad.

They give a brief mention to various female parts, but I wouldn't worry.
KEYWORDS


Read more reviews by this Litpick Book Reviewer: LSpro
Recommend this book and review to your friends on Facebook