The Forever War review by JP 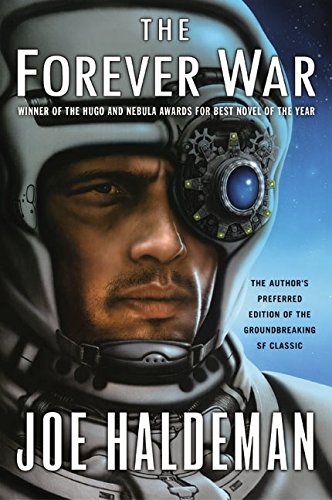 The book, The Forever War, is about a man, William Mandella, who is drafted into a special branch of the army. His branch is a group of specially picked people who are going to be sent to fight aliens who are thought to threaten Earth. People have discovered things in space called collapsars, which are like wormholes in the way that they can instantly send anything to different parts of the universe if it goes through the collapsar. Mandella is among the first group sent out to find the Taurens, the aliens, and destroy them in 1996-97. He survives the first campaign, but when he gets back home, he realizes that trips through the collapsars alter time in a way, so he had aged months, while Earth had aged decades! To find out more about Mandella and the war, read the book!

I really loved this book. It suits my likes perfectly. It is a great sci-fi book and it has lots of action. I could barely put it down! There are a lot of bad injuries, curse words, and implications of sex, so this book would not be good for people under 12 or 13. But other than that, it is a book that I think everyone should read. The ending of this book was perfect. He married the love of his life and the war ended, so I felt happy once I had finished the book. I really got involved with the characters and connected with them. This is probably the best sci-fi book I have ever read, and I recommend it to anyone who likes action and sci-fi.


Read more reviews by this Litpick Book Reviewer: JP
Recommend this book and review to your friends on Facebook