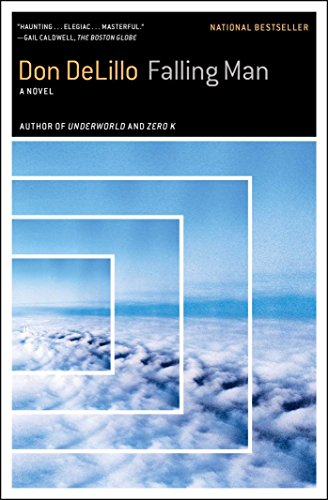 Falling Man by Don DeLillo is a horrific, yet brilliant novel about the moments, days, and years after the terrorist attacks of September 11. Readers dive into the lives of a group of New Yorkers: Keith, who worked in the north tower and survived the attack, his wife, Lianne, unable to free herself from such haunting memories, and their son, Justin, who searches the skies for Bill Lawton, the man who said he will attack again. Readers also branch out into the lives of others in close proximity to the family, and we see how September 11 permeated through all of us. DeLillo provides a powerful and unmitigated vision of a most-terrifying day in history through the scope of ordinary people; a scope shared by all who remember that day and how it chilled us to the core.

DeLillo is magnificent in his use of vivid imagery to recount the events of that fateful day. His reference to organic shrapnel, pieces of suicide bombers lodged into victims, is far more than eerie. His ability to allow readers such a strong imagination of the scene paves the way to one of the strongest themes of the novel: the intertwining of reality and imagination. Such an attack on the World Trade Center seemed like something we could only visualize in a movie. However, the raw reality of the events crosses over into something that was once considered unbelievable. DeLillo takes this idea and brings it into the lives of Keith and his family. Their exchange of dialogue suggests that after 9/11, anything is possible. Though the title may not seem to fit initially, it is the only title that works for this novel. The iconic photo of The Falling Man was one of the few things that seemed to be forgotten from that day. The media shied away from publishing it, and the public was content to turn a blind eye. However, the hundreds who jumped from the burning towers may be the best image to accurately characterize that day because it brings the imaginative to life. DeLillo recognizes the power of The Falling Man, and he has produced a lasting image that no one will forget.


Read more reviews by Litpick Book Reviewer: ALue
Recommend this book and review to your friends on Facebook