The Cry of the Icemark review by CD 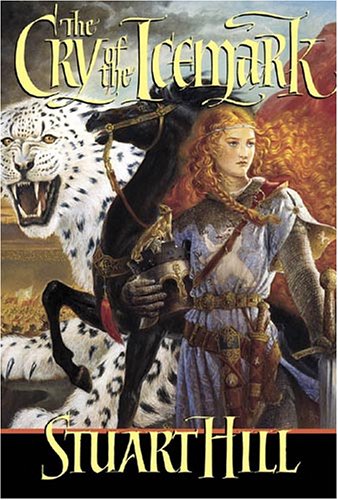 Stuart Hill's first novel, The Cry of the Icemark, is a brilliantly written tale of destiny and personal discovery. It concerns a fourteen year old princess, who after her father has just died in battle, finds herself ruler of a country on the brink of war. With the help of a witch's son she makes allies with Vampires, Snow Leopards and Werewolves who agree to join her in her battle against a greedy, unstoppable nation.

The Princess and her advisor, Oskan Witch's Son have to face the Polypontus, a nation whose only goal is to expand their ever-growing borders. They will forge alliances, create battle plans, insure the safety of the Icemark and try to stop an undefeated army, and all of this before their 16th birthdays. The story is set in an imaginary land called the Icemark and travels to exotic places such as The-Land-of-the- Ghosts to visit with Vampires and other fantastic creatures. We follow the princess on a journey to the Hub of the World, to a kingdom known as the Icesheets, where Tharaman-Thar rules the Snow Leopards and deep into the forest, where the Holly King and the Oak King reign over all beings in the wood. Her journey becomes ours as we breathlessly read Hill's book, feeling the character's pain, fears and triumphs.

Hill's characters are rich and realistic, and his writing allows a clear view of his imaginary kingdom, The Icemark. As Thirrin steps through the gates of her home, readers see what she sees, a "fortress dominating the streets from its position high on the hill. The royal banner of a fighting white bear on a blue background was clearly visible as a cool breeze stretched it flat and snapping in the air as though it was leading the charge of King Redrought's cavalry". A rival to the Harry Potter stories, Hill's tale will capture the imagination of young readers and have them eagerly reading the story, caught up in the remarkable journey of Princess Thirrin Freer Strong-in-the-Arm Lindenshield.

Although The Cry of the Icemark cover suggests that the novel is suitable for readers nine through twelve, it should be recommended for ages 12 and up because of some mild violence.


Read more reviews by this Litpick Book Reviewer: CD
Recommend this book and review to your friends on Facebook