The Crown of Embers review by KjOls 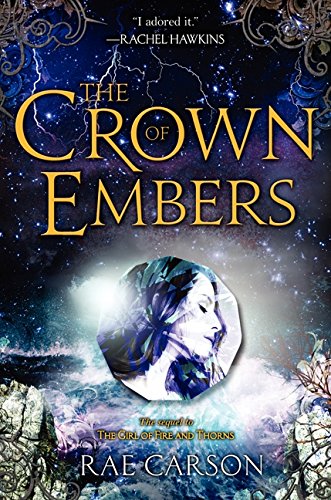 Elisa is the first ever ruler to also be a bearer. She takes the throne in the aftermath of the war against the Invierne and her husband's death. One day, as she is praying in the catacombs beneath Brisadulce (her capital city), an attempt is made on her life. During a thorough investigation of the cavern where it happened, a secret passage leading to a hidden village beneath the city is discovered. Their leader speaks of a secret power, zafira, that is mysteriously linked to the Godstones. Elisa feels called to find the zafira, and decides to set out for a place where it is said to be found, in the south, at the gate of life. She sets out on a journey that quickly begins to seem impossible. Elisa must make sacrifices, trust people she's certain about, brave terrible storms, and hold true to her mission, all while battling something improbable and slightly improper - love.

Wow! I totally loved this book! I'm definitely going to read it many times in the future. Elisa is an astounding protagonist because she continually gets into sticky situations and always works her way free from them. This book was impressively easy to get into - it practically absorbed me! The descriptions were so vivid and clear, it was like I was there; and the book was so captivating, I finished it by 7:00 PM of the day I found it in the mailbox after school! My favorite part was Elisa's revelation about the zafira, and how she chose to save the life of an Invierne, rather than leave him to living death. Elisa was brave and loyal, standing true to her beliefs no matter the circumstances. As for the romance, let's just say I saw it coming in the first book. The Crown of Embers is another truly magnificent novel to add to anyone's list of favorites (It's on mine! :).


Read more reviews by this Litpick Book Reviewer: KjOls
Recommend this book and review to your friends on Facebook