The Crossroads review by LSv 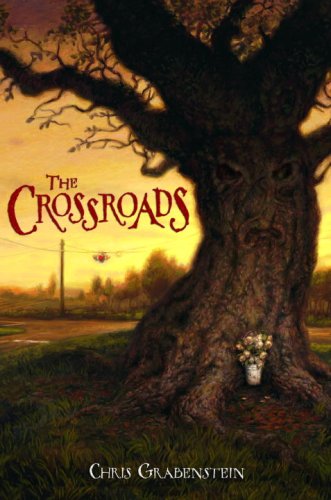 On June 21st, 1958, a Greyhound bus collided with a Thunderbird convertible, killing all the bus passengers, the driver of the car, and a motorcycle cop on the scene. This event happened on a road in Connecticut, where County Route 13 meets State Highway 31. Also known as the Crossroads.

Fifty years later, eleven year old Zack Jennings moves into the house nearest the Crossroads. Even though his mother died a few years earlier, and he lives in fear that her ghost will come back to haunt him, Zack feels that things are starting to get better for him. He has a nice new step-mom, a new dog, and a new, hopefully happy, life.

Unfortunately for Zack, there is a tree by his house, with a white cross and twelve white roses next to it. This tree just happens to be haunted by the spirit of the man responsible for the fatal bus crash . When the tree is struck by lightning, he is released back into the world, where he can kill people again. And it just so happens young kids (like Zack) are his new targets.

If you're looking for a book that's slightly scary, but also has a light, humorous side, I'd recommend that you read The Crossroads. It had enough scary ghost stuff to make you feel like you're being watched, but also plenty of funny moments. It was just a little bit mysterious, so it keeps you thinking about what's going to happen next (what else would you expect from an author whose last name means gravestone in German!) It had an exciting plot, and plenty of unique characters. It wasn't like any other book I've ever read.

I do have to add that all the characters made the storyline a bit confusing. It was a little overwhelming for me to keep track of all those characters, but all their stories come together by the ending.


Read more reviews by this Litpick Book Reviewer: LSv
Recommend this book and review to your friends on Facebook