Counting to D review by ViviB 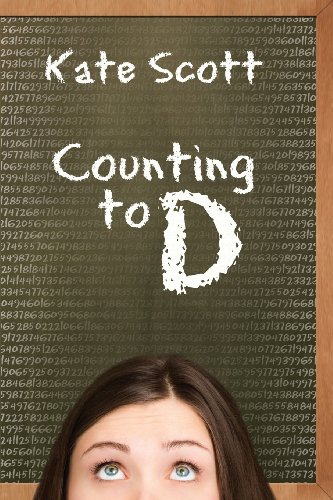 The book Counting to D pulls you into the world of Samantha "Sam" Wilson and her life as a not-so-ordinary teenager: although she is taking calculus as a sophomore, she is dyslexic and illiterate. When her mother gets a job in Oregon, far away from her life as the dyslexic math freak and her closest friends Arden and Gabby, she thinks that it's the perfect opportunity to start over, without anyone knowing about her learning disability. And then Sam meets the Brain Trust, a group of very competitive seniors made up of Lissa, Graham, Miles, Haroon, and Nate. Taking five AP classes and being a math whiz means that she's ideal material for their group, but she also finds herself taking a liking to the glimpse of normal high school life that she gets in her English class with jock Eli and popular Katelyn.

I loved this book--I finished it in less than a day. Sam was a lovable and strong main character, and all of the supporting characters were likeable as well. They were three-dimensional characters: I felt like they were real people.
Something that I really liked was that the author avoided stereotypes. Katelyn may have been pretty and popular, but she wasn't dumb or mean. Eli may have been a jock, but he was thoughtful and kind.
Another aspect of the book that I enjoyed was the romance between Sam and Nate, although I think that it could have started off more slowly.
Sam's feelings seemed realistic; she had infrequent emotion highs that seems like an accurate portrayal of someone who's struggling to learn to read in a semi-hostile high school environment where she is the anomaly, unable to read or write when everyone learned years ago. She also deals with family issues, so she has to work through all of this--but at least she doesn't have to do it alone. Nate, Eli, and Katelyn are there for her. I loved all of the friendships that she developed throughout the book.
Counting to D was realistic, well-paced, and unique. It was a light read that I thoroughly enjoyed.
Rating:
5
Content Rating:

The book has references and scenes that might not be appropriate for some.
KEYWORDS

Read more reviews by Litpick Student Book Reviewer: ViviB
Recommend this book and review to your friends on Facebook