Breaking Up review by Little Willow 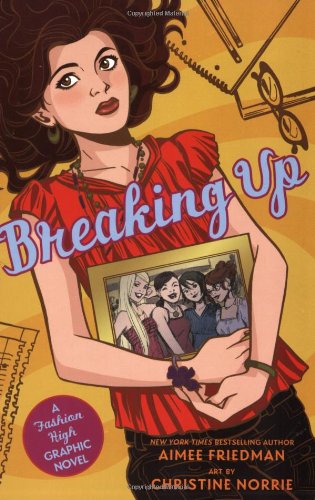 Welcome to Georgia O'Keefe School for the Arts, where teenaged artists and fashionistas strut down the hallways.

BREAKING UP: A Fashion High Graphic Novel tells the story of four students: bold Mackenzie, dancer Erika, striking Isabel, and artistic Chloe, our narrator. The girls used to be as thick of thieves, especially Chloe and Mackenzie, but as junior year goes on, they drift apart. Will their friendship survive boys, school, and family issues?

Mackenzie starts off the year with a bang, getting a lightning bolt tattoo on her back/shoulder. On a quest to be loved and popular, she seeks out the attention of the reigning couple of their grade level. Mackenzie finally becomes friends with the queen bee, Nicola - and begins secretly dating Nicola's boyfriend, Gabe.

Erika has been dating Kyle since they were sophomores. They share a passion for music, though different kinds: quiet Erika plays the piano while Kyle rocks out on his guitar with his band. Their friends think they look cute together and tease them about how sweet they are, not knowing that Kyle's pressuring Erika to do something she doesn't want to do.

Isabel has a gleam in her eyes and a need for her parents to ease up on her. Her parents are generous and loving in many ways, but they don't want her to date and they constantly keep tabs on her. Frustrated, Isabel throws herself into dance rehearsals. She starts seeing a soccer player named Brad even though it's against the rules.

At the heart of it all is Chloe. While developing her talent in art class, she also develops a crush on Adam, a boy that Mackenzie thinks is totally dorky. Dating him might mean pushing an already drifting Mackenzie further away. Chloe finally admits to herself that she does like Adam, and when she finds out he likes her too, they start to date. By not telling her friends about her first real boyfriend, though, Chloe's only hiding something huge from them and making Adam feel as though she's ashamed of him.

As the story proceeds and the girls grow too busy and too caught up in their personal lives to talk as much as they used to, it gets easier to lie to one another or avoid each other entirely. The tension builds, then explodes, and the once tight-knit group effectively breaks up. It is this disintegration to which the title truly refers, telling a story that many girls have gone through themselves with their best friends.

This graphic novel boasts detailed black-and-white illustrations by Christine Norrie and text by Aimee Friedman. The dialogue is easy to follow, as is Chloe's narration. Unlike the majority of comics and animated projects, which have characters stay in the same outfits ninety-nine percent of the time, Norrie blesses these characters with varied wardrobes. This is a plus. After all, the series called FASHION HIGH, and I don't think Mackenzie would be caught dead in an outfit she had already worn. It also gives each girl a style indicative of her personality. Mackenzie and Isabel are more trendy than Erika and Chloe, who tend to be conservative. Norrie gives each girl a distinct look, making it easy to tell who's who, while Friedman gives each her own voice.

The story does touch on some mature topics, making it appropriate for ages 14 and up, a little older than Scholastic's typical reader. In this particular case, the closer the reader is to the age of the four girls depicted, the more likely the reader is to relate to their experiences.