The Brave Apprentice review by MY 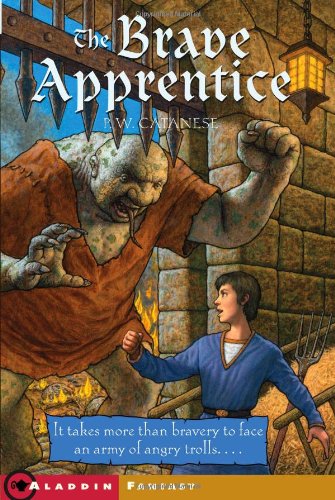 The Brave Apprentice
by P. W. Catanese
Age Range - 12 and up
Genre - Adventure

Patch Ridling is a tailor's apprentice. His life is a pretty simple one, he works hard and learns a lot. But one day Patch rescues his friend Osbert from being sick. On his way across a bridge to the town, an old and blind troll pops up. Patch pushes the troll into the river and becomes a town hero. Patch is summoned to the King's castle to help fight a bunch of trolls that have become a big threat. But Patch realizes that this threat is bigger than he expects when the trolls are lead by a human, who knows the trolls secrets of how they can die. He wants to be king, and has told the trolls to capture the King's castle. The trolls are basically indestructable, and they need to find the trolls weakness. Will Patch and the kingdom figure out their weakness, or will the kingdom already have been destroyed?

This book was really great. The plot was great, and new suprising things came up, making Patch's quest even harder. This book had me reading and not putting the book down because of the suspense and excitement. I also couldn't believe the riddle, and I only guessed it when Patch guessed it.


Read more reviews by this Litpick Book Reviewer: MY
Recommend this book and review to your friends on Facebook