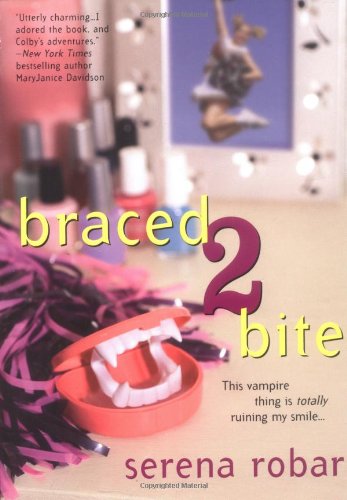 "I don't like the thought of getting staked before being named Homecoming Queen, so we all have some adjusting to do, don't we?"

braced2bite, a teen comedy written by Serena Robar, introduces us to Colby, a popular high school cheerleader. She has a nice family, cool friends, and good grades. She has her sights set on a cute classmate and is hoping he'll ask her to the Homecoming dance. Basically, she's a blond version of Kelly Kapowski from Saved by the Bell.

That is, until she's bitten by a vampire after the big game. She fights back - a part that made me cheer - against a boy who appears to be about her age, but ultimately loses consciousness. When she awakens, she stumbles home and shocks her parents. She's been gone for days, and her gray eyes have turned yellow. Enter her great-aunt, a retired nurse who has seen it all and holds nothing back. She promptly declares Colby a vampire.

Well, she's only half-right, as the family soon learns. Two Vampire Investigators come to see Colby and explain that she's a half-vampire, something the Council frowns upon. Not only does she have to speak before this immortal Council and fight for the right to keep living, but she also has to buy sunscreen to protect her from the sun's harmful rays, get color contacts to cover up her yellow irises - and, don't forget, snag a date for Homecoming!

Thankfully, Colby is far more Girl Next Door than Valley Girl. Though she is lighthearted, she is not vapid, and she has plenty of potential to grow as a character throughout the next two books in this series. Colby will trade her pom poms for Greek letters in the next book, fangs4freaks, when she heads to college and leads a sorority filled with other half-bloods. I hope it's just as light and fluffy as this book is; we all need escapism from time to time.

Ultimately, braced2bite is an easy read combining comedy, romance, and vampires. Pre- teens and teens looking for a vampire story that relies more on laughs than frights will enjoy it.

On the heels (rather, fangs) of her release braced2bite, author Serena Robar took a moment to talk to me about watching vampire slayers, wearing braces, and taking dares.

At the close of the book, you reveal that you watched every episode of Buffy the Vampire Slayer in three weeks. Did you watch it specifically to do research while writing braced2bite, or did it inspire the book in the first place?

Yes, I did watch every Buffy episode in three weeks. I'd always wanted to watch the series, especially after I fell in love with Firefly, another Joss Whedon series that was cancelled quickly (sniff, sniff). After my editor told me they were placing an ad in Buffy magazine about my books, I borrowed my friend's DVD collection of BtVS. I was instantly addicted and watched 6+ episodes a day. It was an amazing way to watch a series, to become totally immersed in the universe and witness the character development over days instead of seasons. If you can do it, I highly recommend it. :)

How did the book come about?

Inspiration for the book was really on a dare. I'd just returned from an Romance Writers of American National Conference and all the editors and publishing houses were telling the writers they wanted to see more paranormal and to really take a chance. To show them something 'out there.' I have always loved the Young Adult genre because I feel the audience is more willing to take a chance on material.

As I was driving in my car - I get the best ideas in my car - I wondered what it would be like to be a vampire who didn't have any fangs. How would they feed? How would the other vampires treat them? What if they had been pretty successful, popular humans and now, since they didn't have fangs, they were considered losers by the vampire community. What would be worse than using fang headgear to eat?

Suddenly, Colby was born. I called my good friend and fellow writer, Shannon McKelden, who loved the idea and dared me to write it.

I was never in a sorority, but I was a cheerleader, and I wore headgear with my braces in high school.

Did you intend for it to be a series? At this time, how many books are going to be in the series?

As I was writing the book, I came up with Psi Phi House and the sorority for the Undead. It seemed only fair that Colby should get something almost 'normal' when so much was taken from her by becoming a half-blood vampire. She deserved a sorority. I figured I would make it a two-book thing.

When Berkley bought my book, they wanted a three-book deal. By the time I finished book two, entitled fangs4freaks,

I knew Piper had to have her own story. She stood by Colby for two books and it was her turn to find a hunky guy and save the day - so the third book in the series is about Piper.

Then Julie Kenner, Johanna Edwards, and I signed an anthology deal with Berkley about three teen supermodel vampires. Since my third book is going to be out in May 2007 and this anthology is coming out in July 2007, I took a secondary character from the series and made him the love interest for my novella. If they do well and people want more, then I would write more (in this series). I love the Psi Phi House and the universe, so writing more would be a lot of fun.

What are your top ten episodes of Buffy the Vampire Slayer? Hush Once More with Feeling Normal Again Help Chosen Storyteller Lie to Me Surprise Becoming Part 2 Wild at Heart . . . and the list goes and on!

What are your top ten books of all time?

This list is always fluid. My favorite books tend to be ones that touched me the most or influenced me in some way. I fell in love with Historical Romances because of Valerie Vayle books. Same thing with Johanna Lindsey, Jude Deveraux, Judith McNaught, and Julie Garwood. I love MaryJanice Davidson's Undead series as well. I rarely find a book that I don't like and am always discovering new authors.