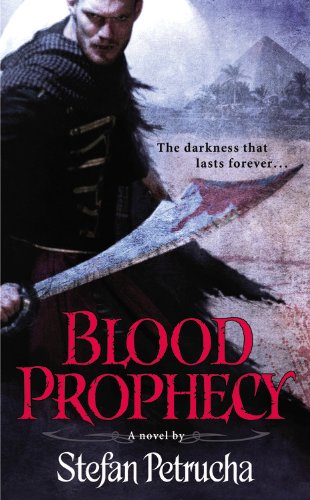 Blood Prophecy by Stefan Petrucha tells the story of Jeremiah Fall, a Puritan living in early America. His world is turned upside down when his father is attacked by a monster while farming. When his father returns to Fall's house after being presumed dead, he only looks like his former self and has actually been transformed into a terrifying creature. He transforms Jeremiah into a beast like himself and kills Jeremiah's mother before being murdered by his own father. From this point, Jeremiah is plagued by a blood thirst that is nearly impossible to fight and must battle against his nature while he searches for a mythical stone that possesses the power to restore his humanity. After more than a century of his immortal life, he finds the Rosetta stone: the key to translating historical documents written in ancient languages and the only known way for Jeremiah to become human once more. From here, the war to obtain the stone begins against armies of great empires and followers of a buried and dangerous religion.

Blood Prophecy is a unique take on the traditional fantasy story that involves exciting glimpses of history and is told from a monster's perspective. Petrucha manages to make the reader feel like he is part of the story and really witnessing history along with Jeremiah. The novel is clearly well researched and is fast-paced to read. I felt very engaged in the story the whole time, although the beginning of the novel was slower and did not lead the reader to expect the fantastic story that followed the introduction. I thought Jeremiah was a realistic seeming character and the reader could relate to him, even if he is a monster. Also, that the protagonist was a monster gave the novel an interesting twist. I did not really dislike any aspect of this novel although the romance plotline did feel weak at times. I thought the Petrucha's descriptions were always well incorporated into the story and created vivid images for the reader without dragging on or taking away from the story. I would highly recommend it to others as a distinctive read that stands out from many other fantasy novels I have read.


Read more reviews by this Litpick Book Reviewer: HBren
Recommend this book and review to your friends on Facebook