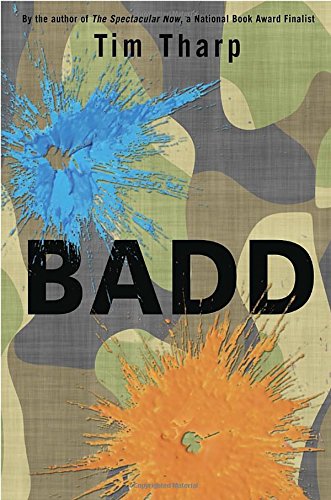 Badd
by Tim Tharp
Age Range - 12 and up
Genre - Fiction

Ceejay has always grown up in the shadow of her rebellious yet charming older brother, Bobby. She doesn't mind, though. Ceejay and Bobby have always been able to understand each other better than anyone else. So when Bobby is sent to fight in the war in Iraq, Ceejay is devastated, and can't wait until he comes home. But when he does, it's not quite how Ceejay had imagined. Bobby has changed, and no one, not even Ceejay, understands him anymore. First, he's avoiding his family, then he's consorting and even befriending Ceejay's enemy, Captain Crazy? Something just isn't right and Ceejay takes it upon herself to find out what it is. As Ceejay investigates, she will come to the realization that not everyone is how they seemed. She will gain unexpected friends, and lose a few on the way. This is a coming-of-age story, in which Ceejay will discover things she's never known about people, and change her whole perspective on life.

Badd was an interesting book. Its unusual plot helped it to maintain the element of surprise and keep the reader on their toes. The main character, Ceejay, was spunky and original: a tough girl with a twist. She acted like a boy, like Bobby, like nothing could faze her, but there were a lot of mixed emotions in her. She had a hard shell on the outside, but she was confused inside. These feelings were revealed through the first person dialogue, which fit well with the story.

The rest of the characters were easily recognizable with their lines; they all had specific personalities that complimented each other. The uses of contrasting characters (catalysts) aided the plotline and added some exciting scenes. The language fit the first person dialogue, but there were many cases of foul language. It also included some sexual innuendos, as well as drug use and references. This book was an interesting book that got me thinking. It included a lot of tough subjects, like the war and what it can do to people, teen drinking and pregnancy, drugs, and most of all, changes, for better and for worse. I would recommend it for anyone who wants a page turner and doesn't mind the references and language


Read more reviews by Litpick Student Book Reviewer: RHanse
Recommend this book and review to your friends on Facebook