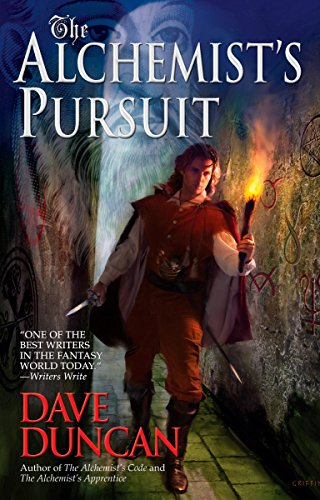 When several aging courtesans are found strangled to death in Venice, Alchemist Nostradamus and his young apprentice Alfeo are hired to find the brutal murderer. As time passes, more women are found dead and the search for the killer becomes more desperate. Nostradamus is battling painful arthritis, though, so it is Alfeo who must travel through Venice to ask questions of suspicious characters and witnesses. They are soon hired by the Michiel's to find the killer of their father, who just happened to have been killed over eight years ago. But as both cases progress, they begin to intertwine and are soon found to be more related than anyone originally suspected.

The "Alchemist's Pursuit" was an interesting book that I very much enjoyed. It kept me wanting more and almost every chapter ended in an exciting cliffhanger. Some of it was a little confusing at certain times, but most of it was eventually explained. The book definitely wasn't your classic "Nancy Drew", but it was a mystery that got me thinking and I was very attached to the characters. Overall, it was a good book.


Read more reviews by this Litpick Book Reviewer: MRhea_MCO
Recommend this book and review to your friends on Facebook