Across the Wall review by JMc 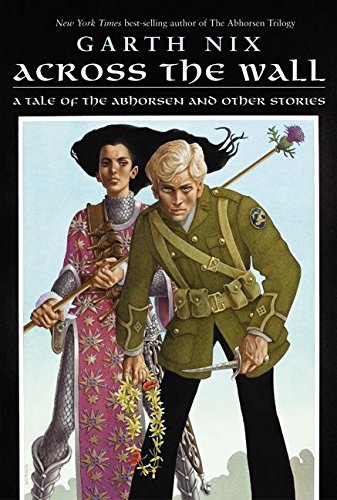 In, "Nicholas Sayre and the Creature in the Case", Garth Nix explores the world of The Abhorsen from Nick Sayre's perspective. After attending a dinner party at a private country house in Ancelstierre, Nick finds a monster from the Old Kingdom, thought to be dead, in the basement. After a secret organization kidnaps him, they feed the creature some of Nick's blood. The creature immediately stirs, and goes on a rampage to distill Nick's potent blood with less potent blood of others. As the creature travels closer and closer to the Wall, Nick must stop it from crossing into the Old Kingdom, before it becomes The Abhorsen's responsibility. This is but one of 13 stories in this anthology. Others include a Western with a fantasy twist, a "Choose Your Own Adventure" parody, two Arthurian tales, and an urban version of Hansel and Gretel. With this collection, Nix proves that he is one of the most versatile writers out there.

I have read almost ever Garth Nix book printed, and still he amazes me. When I thought the story of The Aborsen Trilogy was wrapped up, he delves into it again. When I thought all Arthurian mythos was the same story regurgitated over and over again, he creates two fresh tales. When I thought Nix could only write serious pieces, he blasts me with two humorous ones. This collection definitly shows how diverse Nix is as a writer. Still, not all of the stories were enjoyable. Both Arthurian tales, one about the Lady of the Lake and one about Merlin and Nimue, were over my head. Partially because I didn't know enough background information on these characters, and partly because I didn't want to read these particular stories. Also, "From the Lighthouse" had a strange ending that I'm not entirely sure I understood. Even then, for every con there is two pros! Nix's "Choose Your Own Adventure" parody, "From the Scum Quarter", definately had laugh out loud moments, and multiple endings. He did a great job in his introductions to the stories, telling where the stories were first published and often adding humor. "Endings", the last story, was the best short story I have ever read. Period. End of discussion. It's complicated in its own way, and very hard to describe. It also could be over the heads of many readers. All in all, Nix has done it again. This reinforces why he is my favorite author tenfold. READ THIS BOOK!

One story has to do with sex, and the others have some violence in them.
KEYWORDS


Read more reviews by this Litpick Book Reviewer: JMc
Recommend this book and review to your friends on Facebook