Twenty-nine years ago, I was president of a community theatre, the Columbia Entertainment Company, in Columbia, Missouri.  Also, I was the director of a youth theatre program for them.   I volunteered hundreds of hours to both programs. It was an amazing learning experience and one that I draw upon from time to time in my career.

Here is the story of probably the most important thing we did in this company:  We created a national playwriting contest for large cast youth theatre plays.  It is called the Jackie White National Playwriting Award Contest and is still in existence to this day.  That’s a long time for a contest of this nature to flourish, especially sponsored by a community theatre.

Thirty years ago I was a young woman who needed scripts for large casts—over thirty students in number, ages fourth through ninth grade. At the time, there were very few plays to choose from, much less musicals for kids. I lamented to a board that I was having a difficult time finding any suitable plays for the season. In the past, I pad the roles with extra non-speaking characters or ones with little ad libs, but what I really needed was youth theatre plays with large casts, period. The board member suggested our company create our own playwriting contest specifically for this purpose. So, really out of desperation, we did!

Please understand, we had NO idea what we were doing. We merely figured it out as we progressed. It took us a few years to perfect the contest, but it is still one of the most valuable programs the theatre created.

Generally, playwrights need their plays or musicals to be produced before a publishing company will represent them. The Denver Performing Arts Center sponsors a New Play Summit each year in February. Their contest is very clever. The first time the winning entries are produced as stage readings with minimal set and costumes.  The audience gives feedback after the performance through a survey. If the play suits DPAC’s needs, during the next season, they mount a full production of it.  My husband and I have attended several years of the New Play Summit and enjoyed being part of the creative process. We feel more invested in the play, because we offered our suggestions. Whether DPAC intends to or not, this is a terrific way to encourage audience members to return to see the production once it is produced.

Your contest could be created by your drama class, community theatre or even youth group. There is no end to the possibilities a contest of this type affords a group. The contest can be as big or small as your group desires. You could sponsor whatever kind of contest you want—ten minute plays, musicals for youth theatre, plays focused on bullying or plays concerning tolerance. It’s all up to you.

Now before you look at these questions and think is an overwhelming project, I want you to consider the people who will receive such fulfillment from the contest. Playwrights are always seeking places to get their plays read and produced. That could be you!

Here are some questions to contemplate when creating your own playwriting contest:

1)    What is the mission of our contest? What is our end result? Are we looking for a particular subject to be explored? Reach a particular audience? Attract an underserved demographic?

2)    What are the requirements of the winning script? Cast size, gender and age of characters, length of play or musical, set, costumes props and the feasibility of producing the script within the confines of our budget are all important questions to consider.

3)    Is any subject taboo? In some social circles, certain subjects are considered inappropriate.

4)    How about inappropriate language?

5)    Should we charge a fee to enter the contest? How much?

6)    Are there granting agencies or donors we could approach to fund the contest?

7)    What is our budget to spend to advertise the contest?

8)    What free media sources will we use to publicize the contest?

9)    Will we fully mount the winning entry?

10) Should we present a stage reading?

11) Can anyone enter the contest? Are we seeking only student scripts or adults?

12) Who will read the scripts and make the final decision on the awardee?

14) What will the winner receive? A cash award, gift, certificate, lifetime season tickets?

15) Where will the cash award money come from? A donor? A service organization? Your city’s arts council?

16) After the awardee is selected, will we publicize the winner?

17) Do we want to bring the winning playwright to the performance?

18)  If the winning playwright attends, is it our responsibility to provide room and board to them?

19) If the playwright is present, do we want to host a social in their honor?

A Contest with Their Head in the Right Place

I am an indie author, too. Recently, I ran upon an indie author book contest in England created by a popular children’s author, Edward Trayer.  The Whistling Shelf Award is a fairly new contest. When I was perusing his website regarding it, I discovered he charges an entrance fee and donates a portion of money to the Blind Children fund in England. Now, that’s my kind of author. Because of this, I quickly entered my book, Bumbling Bea, into its competition.  I look forward to this year’s awards.

Try your hand creating a playwriting contest. The Jackie White National Children’s Play Writing Contest is one of the most important programs the Columbia Entertainment Company ever created. If a desperate, young director like me with no experience creating a contest can be successful, so can you!

Deborah is a veteran drama teacher having taught in Missouri and Colorado for nearly thirty-eight years. Specializing in youth and community theatre, Deborah has directed more than 250 plays and musicals with adults and children alike. Recently, she and her husband moved to Kansas to be near their family and first grandchild. Her award winning middle grade book, Bumbling Bea, can be purchased through Amazon.com. Check out her blog at:  Dramamommaspeaks.com or her website Deborahbaldwin.net. Deborah serves as handmaiden to her two quirky cats and sings harmony to most any song she hears. 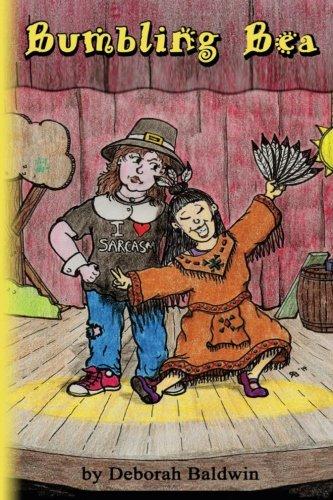