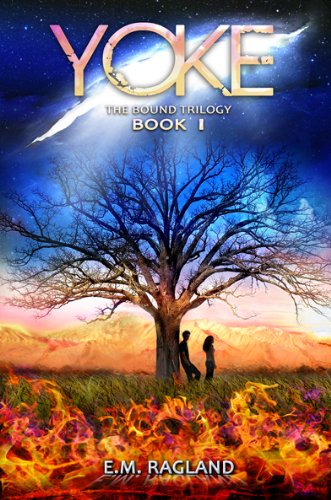 Yoke The Bound Trilogy Book I (eBook)
E.M. Ragland
As far as Sophie Morgan is concerned, nothing sets her apart from other people her age, except maybe her quick temper. But when a car accident claims the life of her mother on Christmas night, Sophie comes face to face with her angelic father and learns her existence is anything but ordinary. As Sophie adjusts to her new life in California with her Aunt Celeste, she is thrust into a world of music, angels, and unearthly vengeance. And she is not alone; misunderstood classmate and local musician Joseph McCafferty is tortured by his own demons. Sophie and Joseph begin a strained friendship that develops into an unshakable, possibly forbidden love that marks the first step along a pre-destined journey in which Sophie must choose between her love for Joseph, her place in Heaven or Hell, and the fate of humanity.
1 Vote

Sophie never thought she was different. She went through her life as normal as you or I, that is until her mother was killed in a car accident. She meets her angelic father and learns that she is more different than she ever imagined. She moves to California to live with her Aunt Celeste and falls into a new world filled with choices. To top it off, Sophie meets Joseph McCafferty, a boy who is dealing with all kinds of problem himself, and they fall into a forbidden love. Sophie must chose between world that she never knew existed and struggle to be with her new found love.